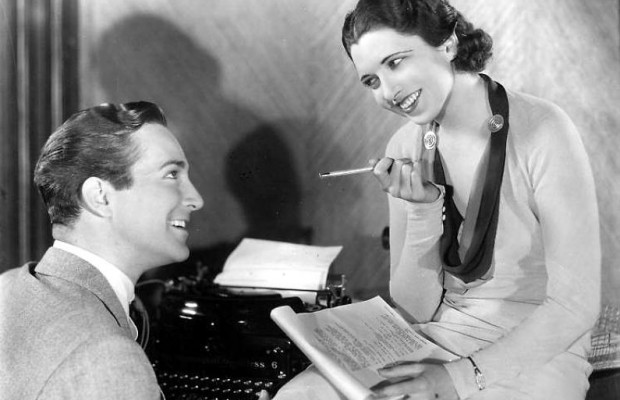 Toronto Film Society presented Man Wanted on Friday, May 10, 2013 as part of Season 66 May Festival: The Pre-Code Weekend.

When I first saw this film, I thought it was such fun to see the roles reversed.  Here Lois (Kay Francis) is married to a wealthy socialite who is only interested in having a good time.  And since he is a man, he isn’t even expected to run the household!  She’s a workaholic who ends up with the young, cute secretary who secretly has a crush on the boss.  If there ever was a “woman’s” fantasy film, this one could be it!  Also, if I remember correctly, this is one of the many pre-Code films that depict a man and woman having a sober discussion about their marriage.

A very frail theme and corresponding dialog leave little for Kay Francis and David Manners to do except go through a routine of 60 minutes.  There is less even suggestive of action; plenty of long stretches where the story threads are conspicuously bare.  ‘Man Wanted’ has much wanting for the large key spots and has need for strong supporting program in the bigger theatres that book it.

Miss Francis as Lois is allegedly a serious-minded business woman who can fire her female secretary and take on an attractive young sporting goods salesman at a moment’s notice.  She can dictate to this young man on the lawn and in a hotel bedroom as well as the office.

Here the ‘serious mindedness’ is permitted by the unannounced author of this script to tire of the audience.  Miss Francis just dictates too many form letters to sustain the interest of the bonafide steno seeking diversion in the picture theatre.

Incidentally, Miss Francis also suffers slightly in comparison with Manners.  His youth emphasizes a maturity in her screen personality which, charming as it is, should not be so endangered.

There is a little by-play afforded by Una Merkel and Andy Devine, although this, as well, is of extremely light fabric.

Theme, after all of its exacting suppression, winds up in a divorce for Lois so that Tom can break his engagement with Ruth.

MAN WANTED, Warner production and release.  Directed by William Dieterle.  Adaptation and dialog by Robert Lord, with no author credit.

Kay Francis radiates so much charm throughout “Man Wanted” at Warners’ Strand this week that the familiar theme somehow does not matter.  She is ably assisted by David Manners and a well-balanced cast.  The screen play, originally called “A Dangerous Brunette,” is the very thing for Miss Francis, who dresses with such good taste.

As for the story, it is that of two ill-matched persons, an ambitious woman and an indolent husband, who become bored with each other.  She finds the ideal secretary in the person of David Manners and harmony in work leads to dangerous intimacy.  And thus the theme unfurls itself in a manner to be expected.  The husband, instead of the familiar boorish person, is quite likable; the secretary’s fiancée is not quite as refined as she ought to be, and Una Merkel does very well with this thankless role.  As a picture “Man Wanted” is plausible and quite free from any jarring notes, and while it is neither original nor outstanding in any other way, it is somehow quite satisfactory.

The comic relief is injected in well-measured doses by Andy Devine.  The directing work of Wilhelm Dieterle seems to be another feather in his cap.