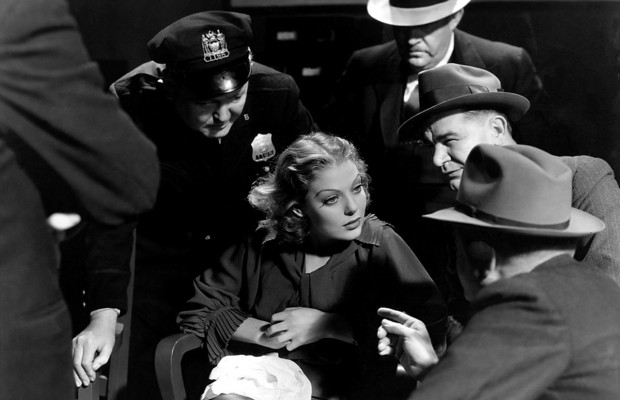 Toronto Film Society presented Midnight Mary on Saturday, May 11, 2013 as part of Season 66 May Festival: The Pre-Code Weekend.

I have never seen this film and really know nothing about it.  TFS president Barry Chapman recommended we show it and again it features the young and beautiful Loretta Young in a role we don’t usually associate her with.  This film also features another staple of pre-Code film, the wonderful Ricardo Cortez.

Just fair.  The somewhat states-righty title gives away the gangster background of this script.  It’s implausible in the main as soon as the badgering Loretta Young character essays to go straight and

encounters vicissitudes which return her to her underworld antecedents, only to meet up again for the clinch with the socially prominent Tone.  Cortez is the heavy and the heavy lover throughout.

Despite much histrionic skill and the directorial and scripting artifices to make ‘Midnight Mary’ ring true, the structure in its entirety is never wholly convincing.  As a result, even the most plausible sequences let down.

Presentation is of the flash-back school.  While ‘Midnight Mary’ is awaiting the jury’s verdict on a murder charge, the chronological court records in the court clerk’s office, with their superimposed succession of dated years, serve as milestones to punctuate Mary’s ill-fated progress ever since her 10-year-old motherless days.

When the plotted stick-up on a swank private gambling club goes wrong, she is thrown together with Tone, prominent young attorney, and, of course, a scion of a socially prominent family.

Some of Miss Young’s opportunities are mitigated against through unfortunate selection of clothes.  There are other patchwork sequences when she is alternately under dominance of Cortez’s will or spiritedly self-assertive.

Andy Devine, Una Merkel, Warren Hymer and Sandy Roth, the last a Metro asst. director who doubles into a bit as one of Cortez’s mugs, do well in sub-parts.  Devine is one of the few unusual comedy pans to come to attention of recent years.  It dates from Universal’s ‘Spirit of Notre Dame’ picture of two seasons ago.  He’s a good-natured hulk who doesn’t mugg or overdo his chores grotesquely, but whose natural lugubrious manner has distinguished him in minor assignments.  He seems to be building gradually.

Technically, there’s no great ingenuity evidenced in the montage of this production.  It’s an orthodox crook meller, varied only by the familiar pattern of the flashback sequence of episodic presentation.

On its Capital theatre (Broadway deluxe) exhibition, ‘Midnight Mary’ is supported by an unusually elaborate stage presentation.  That’s the answer to its b.o. strength.  It’s but fair fan fodder on its own.

They called her midnight Mary, but under the beaded lashes and the painted mouth was the soul of an innocent child.  At the Capitol it is cool and smoking is permitted in the balcony, a combination

of virtues which makes it just possible to stifle the tremendous yawn which is always threatening to interrupt the recital of Mary’s sufferings.  When it is all over, the attentive film-goer will be prepared to admit that life is very hard, that love is a potent emotion and that most of “Midnight Mary” has a morbidly reminiscent appearance.

That the heroine’s trials are unusually bitter and that she was justified in murdering Leo the Rat are facts that the most callous observer will be unable to deny.  Consider the rocky road which Mary follows from her mother’s knee to the bedroom of Leo the Rat, with Leo dead on the floor and a smoking gun in her hand: wrongfully accused of theft as a girl and sentenced to three years in the house of correction; the endless search for honest employment after her release and the final desperate flutter before she heeds the sinful call of Leo the Rat; how she hears another call, the call of love, and goes straight in order to make herself worthy of Tom Mannering; and, finally, how Leo finds her out and how she kills him to save Tom from being killed.

Loretta Young, Franchot Tone and Ricardo Cortez play the leads. “Midnight Mary” is an average specimen of its type.  Except for a scene in which Leo clouts Mary heartily on the chin, the only surprise in the film is the discovery that Anita Loos is credited with the story.