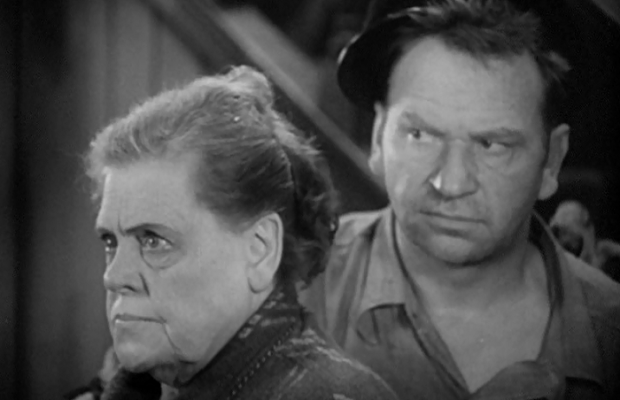 Toronto Film Society presented Min and Bill (1930) on Monday, March 27, 1978 in a double bill with A Place in the Sun as part of the Season 30 Monday Evening Film Buff Series, Programme 8.

In 1933 the Motion Picture Herald and the Hollywood Reporter both named the same lady at the top in their annual polls to discover the biggest draws in films.  She wasn’t young or glamorous–a Garbo or a Shearer or a Gaynor–but an ageing, ugly and bulky lady whose speciality was low-life drunks: Marie Dressler.  She had been a has-been for most of the 20s, but had returned to fame with the coming of the Talkies, and within a year had achieved a great popularity….At that time the private lives of stars were common property, to a degree far surpassing that of the current PR-angled shhow business scene, and every cinemagoer knew that Dressler had triumphed over adversity: thus she had a very special meaning during the years of the Depression.  It was once said that she was the Heart of America, just as Douglas Fairbanks Sr. was the son of America and Mary Pickford its girl next door.  But Doug and Mary (apart from the fact that they had been around so long) were out of tune with the times, with their optimism and high spirits, their gracious living and innocence: the public wanted rather to see the pessimistic and worldly-wise Dressler.  Her normal expression was one of extreme scepticism–she of course being the only sane person around.

However, she was a mistress of facial expression.  She was a considerable actress and a  prodigious comedienne (her popularity was in no way a freak), with much experience in vaudeville.  Most of the early humour she had generated had been crude references to her girth.  She realized early, she said in her memoirs, ‘The Life Story of an Ugly Duckling’, that she ‘was too homely for a prima donna and too big for a soubrette’.

The Great Movie Stars: The Golden Year by David  Shipman, 1970

Marie Dressler may not have been “just another pretty face,” but she was a Star.  With an ample figure like a rain barrel and a face that fell into folds lke those of a St. Bernard, the lovable if unlovely Miss Dressler was paid tribute just before her death in 1934 by Will Rogers: “Marie Dressler is the real queen of our movies,” and she was indeed that for several years….She was equally adept at comedy and drama.  Her harridans were proud, her grand dames were down to earth, and her appeal was universal.  She was proud of her long career and reveled in her belated social acclaim.  Having suffered a series of ups and downs in her career and having been bankrupt on several occasions, she never forgot the importance of steady work and maintaining the facade of stardom.  She is credited with having uttered one of the more viable quips about Hollywood: “You’re only as good as your last picture.”

Marie Dressler (Leila von Koerber) was born on November 9, 1869, at Coburg, Ontario.  Her family moved from town to town during her childhood and, consequently, she never went to school.  At the age of fourteen Marie joined a travelling light opera troupe.  In 1886 she had her first major role, as Cigarette in ‘Under Two Flags’.  Various roles in other opera companies followed, till she arrived on Broadway in 1892 in Maurice Barrymore’s (father of John, Ethel and Lionel) ‘Robber on the Rhine’.  Still under a cloud of obscurity, she sang in New York City beer halls till she supported the legendary beauty Lillian Russell on Broadway.  Marie’s first Broadway starring role came in 1896, as a music hall queen in ‘The Lady Slavey’.  Around this time she began appearing in vaudeville, supporting Anna Held in ‘Higgledy-Piggledy’ in 1901; gradually Marie’s fame grew until 1910, when her comedy ‘Tillie’s Nightmare’ was an enormous success.  As one of the nation’s leading stage artists, it was inevitable that Marie Dressler would enter films–her first was a reprise of her stage hit, called Tillie’s Punctured Romance, released in 1914 and co-starring Charlie Chaplin and Mabel Normand.  This Mack Sennett picture is often considered the first American feature length comedy and was a great hit.  Surprisingly, her subsequent silent films were not popular, and her career went rapidly downhill until her friend, the influential screenwriter Frances Marion, wrote Marie into a few late silent comedies.  Anna Christie (1930), scripted by Frances Marion, pushed Marie Dressler over the top, in addition to being the first film in which Garbo “talked”.  Soon after came Min and Bill, which won Dressler a Best Actress Academy Award and was the top grossing film of its year.  For the next four years Dressler was at or near the top of the boxoffice polls, while earning a weekly salary of $5,000.  Still at the top, she died of cancer on July 28, 1934.

Wallace Beery was one of the screen’s most lovable rogues as well as one of the top money-making stars for MGM in the 1930s and 1940s.  His film career had taken him from circus trainer to chorus boy to villain.  He may have been  nine parts personality and one part actor, yet on occasion he could, if he wanted, turn in a screen performance that earned sound critical praise, such as in Viva Villa (1934).  Coworkers frequently found Beery difficult to work with.  He would not rehearse scenes and would often change his dialogue at whim.  Besides, he upstaged all his coworkers and his maners at best were gauche.  Altough he was one of the biggest stars at MGM, where he worked full time from 1930 until his death in 1949, Louis B. Mayer disapproved so much of his working habits that he paid him $150,000 a year to work only twelve weeks a year.  “Get Beery in and get him out” was his slogan.

Wallace Beery (April 1, 1886 – April 15, 1949) started in films in 1913 and made a name for himself during the 1920s, mainly at Paramount.  However, it wasn’t until he landed at MGM that he became a Star.  His first MGM picture, The Big House, brought him a Best Actor Academy Award nomination; he won the Oscar for The Champ, the following year.  From 1930 to 1935, Wallace Beery was at the top of his craft and delivered several memorable portrayals in some top-notch films: Billy the Kid; The Secret Six; Hell Divers; Grand Hotel; Flesh; Dinner at Eight; Tugboat Annie; The Bowery; Viva Villa; Treasure Island; The Mighty Barnum; China Seas; Ah, Wilderness.

George Hill (1988-1934), the director, seemed to have a bright career ahead of him in the 30s, but was defeated by alcoholism and committed suicide after a conference at MGM on what would have been his most important feature to date, The Good Earth, which was finally released in 1936.  He began directing in the mid 20s, but was not noticed until he hooked up with his wife, Frances Marion, for three films in 1930-1: The Big House, Min and Bill and The Secret Six.