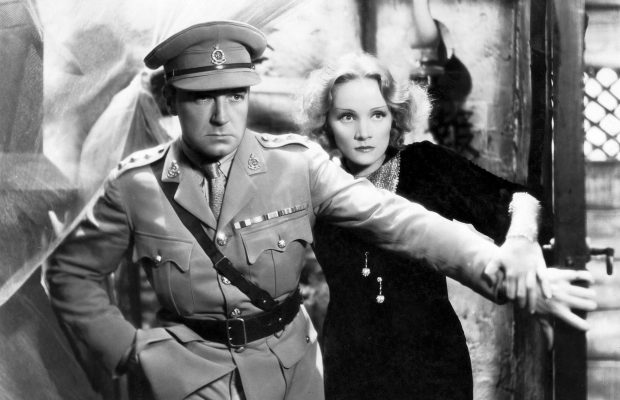 Toronto Film Society presented Shanghai Express (1932) on Monday, October 2, 2017 in a double bill with The General Died at Dawn as part of the Season 70 Monday Evening Film Buff Series, Programme 1.

Toronto Film Society presented Shanghai Express (1932) on Monday, July 24, 1989 in a double bill with Sleeping Car to Trieste as part of the Season 42 Summer Series, Programme 3.

I imagine for most of you, like myself, the films that Dietrich and von Sternberg made together are magical classics, etched into our memories.  Shanghai Express probably tops them all although there is definitely something extra special about all the films that they made together.  However, I’m not sure that any of them were a walk-in-the-park for Marlene.

Recently reading von Sternberg’s 1965 autobiography, Fun in a Chinese Laundry, I came to the conclusion that he would have been a difficult man to work with.  He was a perfectionist, something we film buffs actually appreciate, but by being so, he didn’t suffer fools gladly and could be a slave-driver when it came to pulling exactly what he wanted out of an actor.  On one hand, he explains the difficulties he had working with certain actors, yet he lets you know that he isn’t trying to blow his own horn.  However, you get the impression that he is somewhat thin skinned with regard to criticism from his actors or of the making of any of his films.  So, what is von Sternberg’s true nature?

Here’s a little excerpt of what he writes with regard Marlene: “Despite her melancholy, she was well dressed and believed herself to be beautiful, though until this was radically altered by me she had been photographed to look like a female impersonator.  There are many unflattering photographs of her pre-Blue Angel period in existence, portraying an inhibited subject almost anxious to hide.  Nevertheless, she distributed them to all and sundry with the air of bestowing a priceless gift. One of them is in my files.  Scribbled on it (in German) is ‘I am nothing without you’.  This accolade I declined then, and I do so now, though I must accept some of the responsibility for her image in my films.  Never before had I met so beautiful a woman who had been so thoroughly discounted and undervalued.”

“Some of the admirers she subsequently collected came to me to state bitterly that they had sought in vain the image of her that flashed on the screen.  Amusingly enough, a famous writer who should have known better went so far as to say that I had done him considerable harm by endowing her with a personality not her own.  I did not endow her with a personality that was not her own; one sees what one wants to see, and I gave her nothing that she did not already have.  What I did was to dramatize her attributes and make them visible for all to see; though, as there were perhaps too many, I concealed some.  There was no reason for anyone to complain, as what most men seek in a woman is not difficult to locate.  Had I included ‘buyer beware’ in the main title of The Blue Angel, no one would have paid heed anyway.”

He mentions that although he taught her many things, he did not teach her to be garrulous about himself.  What’s interesting is that if you read books penned by Dietrich—ABC or her so-called autobiography Marlene—she never mentions him.

On a personal note, Marlene Dietrich was always a family favourite.  She was a staunch enemy of Hitler and it was reported that she sold more war bonds than any other star.  (Wikipedia)   I knowingly am within six degrees of separation from her.  When selling Israeli bonds in the early 1960s, she was invited to my maternal grandparent’s synagogue.  My grandmother met her and I have a photograph of them, arms around each other’s waist with Marlene looking down at my grandmother with a smile on her face, while my grandmother looks boldly into the camera.  A keepsake that delights us all. 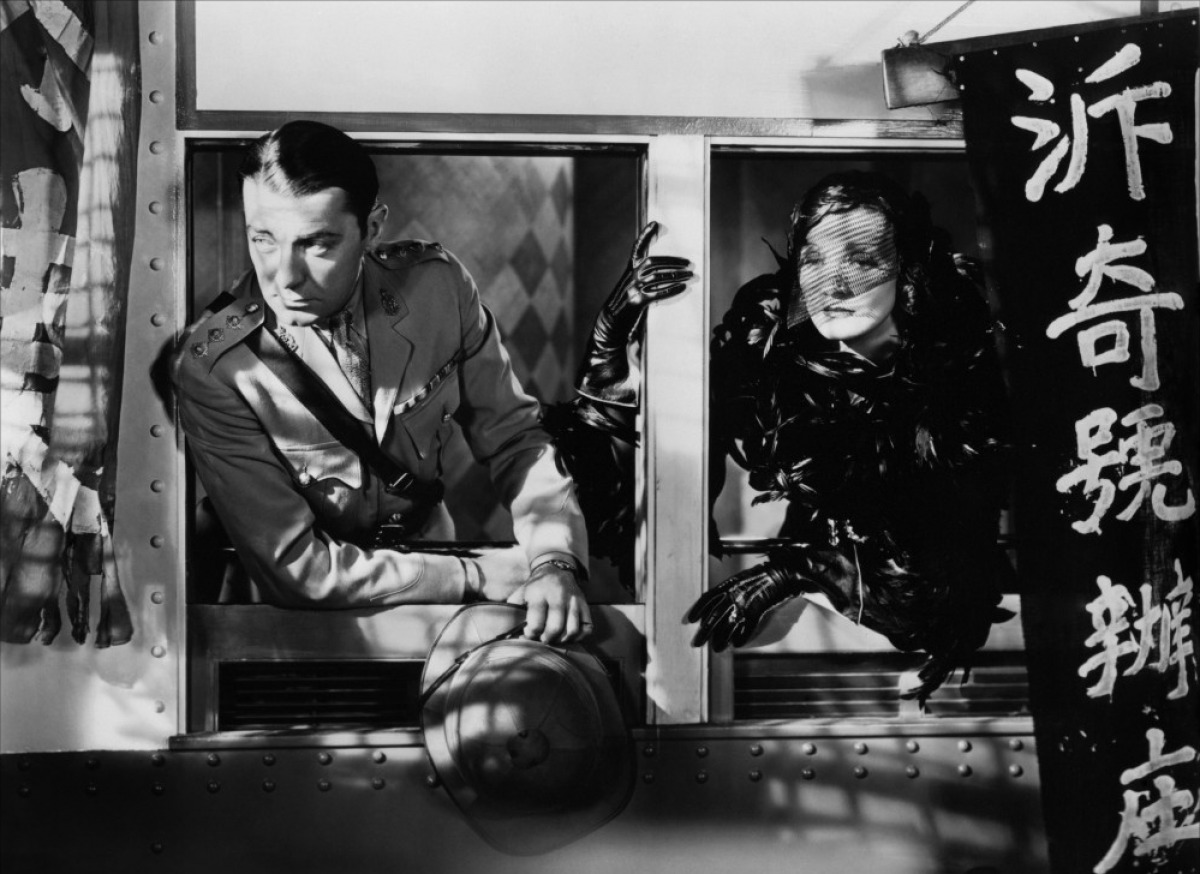 This strikingly beautiful film has been written about and analyzed by so many critics and film historians.  From Homer Dickens, in The Films of Marlene Dietrich¸” Probably the best of von Sternberg-Dietrich films, this “Grand Hotel on Wheels” moved at a crisp pace and was full of excitement.  Everything von Sternberg wanted to say with Dietrich he accomplished here.  His use of light, shadows, reflections, the bustling crowds, the dissolves, the shutters filtering the sun’s rays on Marlene in conjunction with her moods and/or the situations unravelling around her, suggested tremendous sexual excitement, although little more than the Dietrich ankle was exposed.

Travis Banton, Paramount’s brilliant costume designer, created exotic outfits for Dietrich.  She was feathered, veiled, gloved; furs changed with her moods; beads became crystals became lace.  She was literally smothered in clothes.  Someone had to bring something to this image in order for it to work fully.  Without the added ‘something’, von Sternberg’s illusion might not have worked.”

Lee Garmes worked closely with von Sternberg and outdid himself in the photography of Shanghai Express.  He won an Academy Award, while the film and director each received nominations.

The London Times thought, “Her acting finds its strength and impulse in her careful elimination of all emphasis, and the more seemingly careless and inconsequent her gestures the more surely do they reveal the particular shades and movements of her mind.”  Another critic was impressed with “the Oriental impassiveness of Miss Wong meeting its match in the equal impassiveness of Miss Dietrich’s Western sophistication.”  The New York Times felt this was “the best picture von Sternberg has directed…many of the scenes are so beautifully lighted that they recall etchings.” 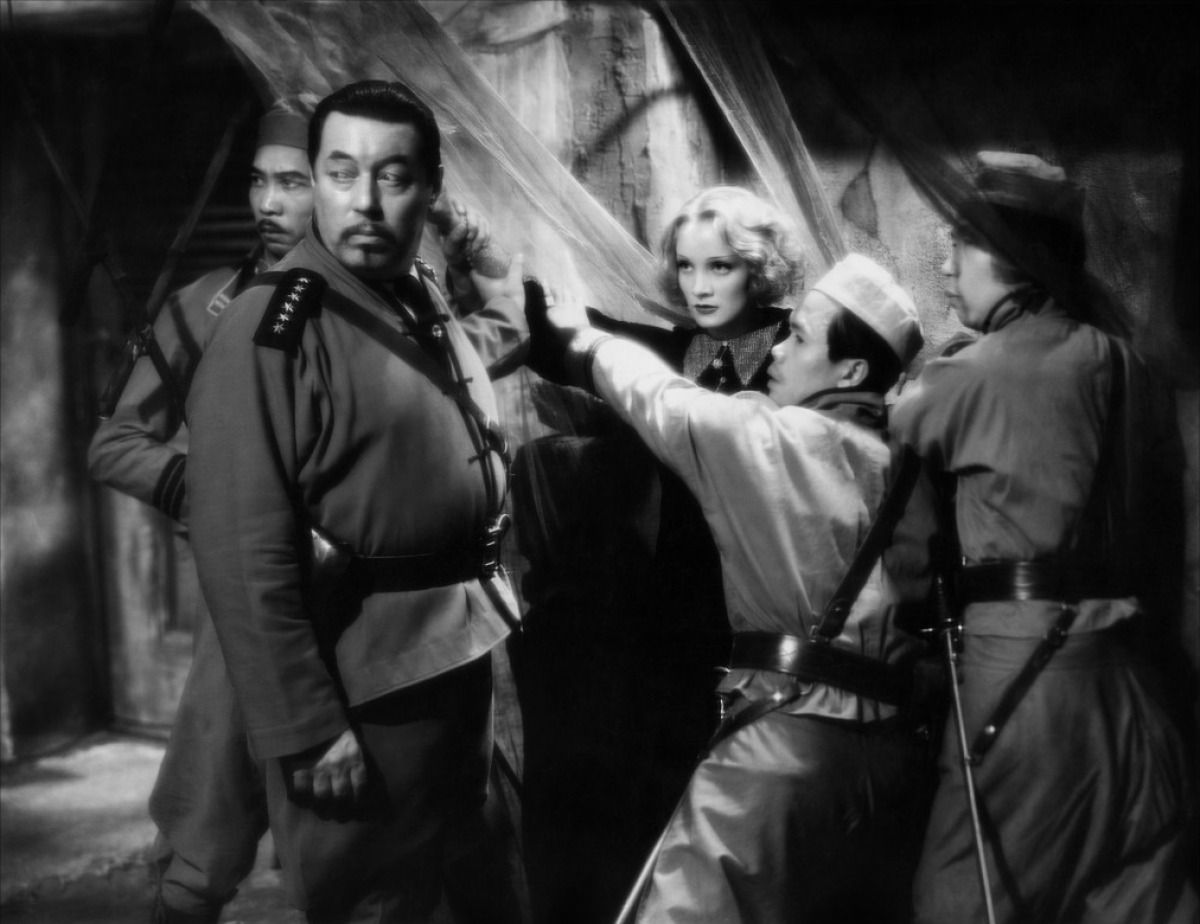 The New York Times critic Mordaunt Hall also goes on to say, “It is as though the audience were taking the ride with passengers and experiencing some of their nerve-racking experiences, particularly when everybody is ordered out of the train by a Chinese officer speaking in his native tongue.  Passports are examined, some in books, others more flimsy sheets of paper.  Finally, a revolutionist is apprehended and again the train plows on its way to Shanghai.

There is a sense of movement of the train while it is going, with undertones and the occasional sound of the shrill whistle.  Mr. Sternberg keeps his camera continually darting hither and thither, but never without lending the eye time to rest upon a scene, which gives his story a chance to progress.

Miss Dietrich gives an impressive performance.  She is languorous but fearless as Lily.  She glides through her scenes with heavy eyelids and puffing on her cigarettes.  She measures every word and yet she is not too slow in her foreign-accented speech.  Clive Brook’s performance is also noteworthy, but he speaks in a monotone and is a little too hasty sometimes in his replies in conversations with Miss Dietrich.  Warner Oland is excellent as Mr. Chang and Anna May Wong makes the most of the role of the brave Chinese girl.  Eugene Pallette serves splendidly as Sam Salt.”

Variety says, “Von Sternberg has made this effort interesting through a definite command of the lens.  AS to plot structure and dialog Shanghai Express runs much too close to old meller and serial themes to command real attention.  Hence, the finished product is an example of what can be done with a personality and photographic face such as Miss Dietrich possesses and the ways to circumvent a trashy story.”  (!)  Suffice it to say that the critic from Variety was not too impressed with the film, story or acting by the main, pair, Dietrich and Brook. Thierry de Navacelle states in his book, Sublime Marlene, that “von Sternberg’s style becomes progressively more concise and more studied.  The plot is rather muddled, but China is recreated in the studio in an extraordinary way, while the supporting characters, though little more than vignettes, are very well drawn.  But, over and above everything else, the photography is stunningly beautiful.  In this, his fourth and last film with von Sternberg, the director of photography, Lee Garmes, excelled himself.  Some shots are almost like engravings, and of course, Marlene does particularly well out of this.  She never looked more beautiful than in Shanghai Express.  This preoccupation with the aesthetic detracts to some extent from the film’s emotional impact.  Yet von Sternberg creates two or three quite astonishing scenes, as he often did.  In one of them Shanghai Lily disappears into her carriage for a moment in near-darkness; then, in close-up, we see her slowly and hesitatingly joining her hands to pray for the medical officer, who is a prisoner of the rebels.  It would doubtless be wrong to hunt too hard for hidden meanings in this digression.  Von Sternberg, however, must surely have attached some importance to it, for the only person who catches Shanghai Lily in this pose is the devout missionary; as instructed by Marlene he breathes no word of it to anyone, but from that moment holds this ‘creature’ in high esteem, and is unable to refrain from mentioning the episode to the medical officer.  Shanghai Express itself was a great success, but other things were not going so well.  It was the time of the kidnap threat to Maria, Marlene’s daughter, and Paramount attempted to cut von Sternberg out of their program, finding him too extravagant.  But Dietrich would not work with anyone else.”

Marlene had something special and von Sternberg knew how to utilize it.

Introduction and Notes by Caren Feldman