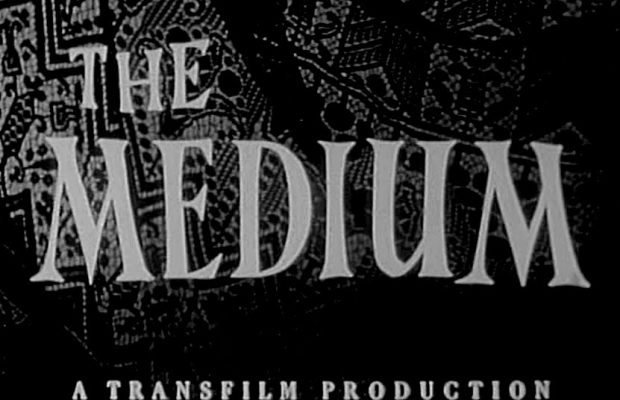 Toronto Film Society presented The Medium (1951) on Monday, October 30, 2017 in a double bill with The Queen of Spades as part of the Season 70 Monday Evening Film Buff Series, Programme 2. 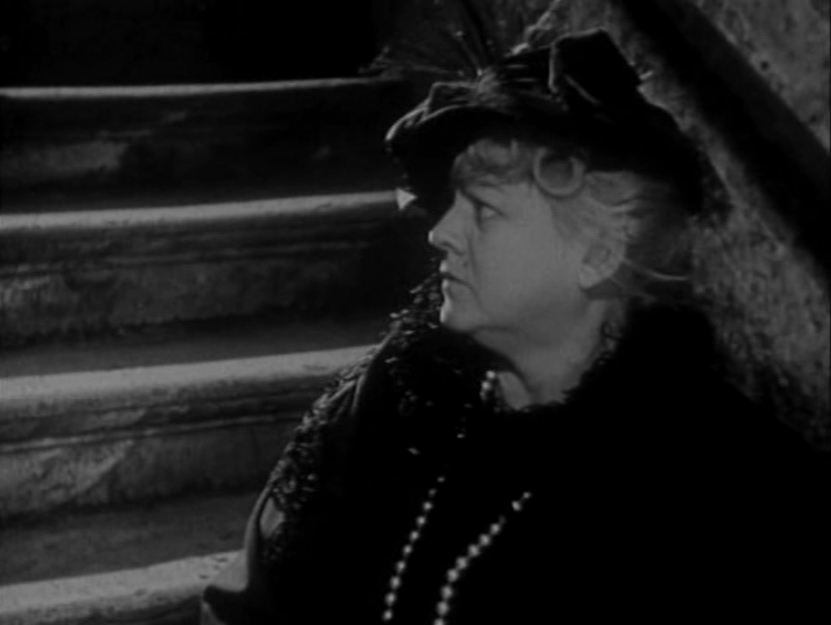 I grew up in a household where both my parents were opera aficionados, something that never rubbed off on me.  However, there was one particular opera that I loved and that was tonight’s film The Medium.  I imagine it was because it was in English, and therefore I could understand the words which I followed along in the libretto that came with the record set, that it had teenagers in it, and that it was somewhat of a strange story.  I realized that the opera we were listening to was recorded from the film and I had a strong desire to see it.

When I was a kid, I shared a bedroom with one of my sisters and one night I awoke to hear what I knew was a scene from the séance.  At first, I thought I was dreaming, but when the cobwebs cleared, I woke my sister and we crept into my parents’ bedroom.  There, on TV, the movie was playing.  My parents let us stay to finish watching the scene but then they scooted us back to bed.  It felt late and of course we wanted to stay; still, as disappointed as we were not to finish watching it, we headed back to our room.

So, it was not until many years later when I was perusing videos at Sam the Record Man, did my pulse race when I saw the film for sale, and no matter the cost, had to buy it.  Tonight, you will be seeing this video copy transferred onto DVD.  Just so you know, there is a 7-second blank spot at one point in the film, so just pretend you are watching a film with a reel change!

The Medium was composed on commission from the Alice M. Ditson Fund of Columbia University and received its world premiere on May 8, 1946 at Brander Matthews Hall during the course of Columbia University’s Second Annual Festival of Contemporary American Music.  Two members of the cast for this film, Leo Coleman (who played Toby and whose real name was Leopoldo Savona) and Beverly Dame (who plays Mrs. Gobineau), took part in this premiere.  A year later came the Broadway presentation of The Medium in somewhat revised form together with a lightweight Menotti companion-piece, The Telephone; and it was on this occasion that Marie Powers made a reputation for herself overnight as a singing-actress of the first magnitude.

In his original conception of The Medium, Gian-Carlo Menotti had in mind two major scenes which were not put to paper because of the need to avoid the expense of extra sets for theatre productions.  However, when the filming of The Medium was getting under way in Rome, the matter of the additional scenes came up for discussion.  Thanks to the insistence of producer Walter Lowendahl, the new Mrs. Nolan and Carnival scenes, as well as the candle sequence, came into being and were incorporated into the picture.  All told, The Medium in its expanded cinematic form, contains about 30 minutes more music than the original stage version.  Italy’s leading music critic described these new sections as “musically the most mature sections of the score.”

Composer and director Gian-Carlo Menotti was a native of Cadegliano, Italy, born in 1911, but his serious musical studies were completed at the Curtis Institute of Music after landing in America in 1928 at the age of 17.

Whereas vice versa, Marie Powers was born in Pennsylvania but pursued the first part of her musical career in Italy, studying at the Royal Conservatory in Milan.  After the death of her Italian husband, and the outbreak of war, both occurring in 1939, these circumstances brought her back to America.  Faced with having to rebuild her career, her big break came in 1947 when Menotti invited her to sing the title role on Broadway in tonight’s film.

Anna Maria Alberghetti was born in Pesaro, Italy, the same town as the operatic master, Rossini and was only fourteen years of age when she made The Medium.  Hollywood immediately signed her to play a small role in director Frank Capra’s film Here Comes the Groom starring Bing Crosby, Jane Wyman and Alexis Smith.  After starring in The Stars Are Singing in 1953 with Rosemary Clooney, she mainly worked in television.

I hope you will agree that the duet sung by Powers and Alberghetti is a musical highlight in tonight’s film. 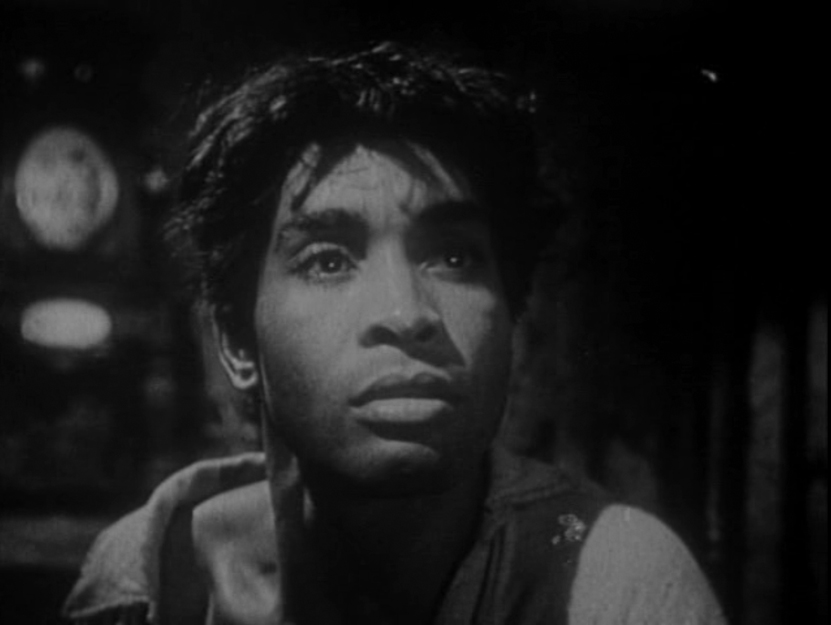 “Menotti’s strange, brooding opera is well-sung here. A haunting score, plus Powers’ electric portrayal of a medium-spiritualist, along with two young lovers caught up in it all.” – Barry Chapman

“Murky filmization of Gian-Carlo Menotti’s opera about an eccentric spiritualist, the girl living in her seedy apartment, and the outcast mute boy in love with the girl.” – Leonard Maltin

“Gian-Carlo Menotti’s ‘The Medium’, which hit Broadway four years ago with such a vibrating sock in the midriff that it has since been twice revived, has now been translated by Mr. Menotti and a group of dedicated enthusiasts to the screen, off which it began to be transmitted to the public at the Sutton, last night. In the frame of the motion-picture medium, Mr. Menotti’s musical drama still packs the punch of a fast swipe of morbid melodrama let fly in an operatic style. For his stark little musical nightmare, bellowed and dinned into your ears for the best part of eighty-four minutes (which is some time for such a trifling tale), conforms to the sort of illustration that the screen is able to provide, and the gentlemen who mounted the production weren’t letting the chance get by.

Their pictorial presentation of this bit about a phony spiritualist who is driven to distraction and murder by the trickery of her own mind is sharp and realistic, mercurial and grotesque, with the elaborate potentials of the camera generously utilized. From the opening shot of the old medium perched ominously outside the door of one of her incumbered clients to the last shot of her flopping desperately upon the body of the mute whom she has murdered, the screen is pictorially charged.

The impulse is not consistent—nor does the shock-effect of its charge continue undiminished right up to the end of the film. Some scenes are more powerful than others—such as that of a sleazy séance, with three avid, grief-burdened people plunging pitifully for the old faker’s tricks; or a scene of the mute fleeing wildly among the freaks of a garish street fair, or a torturing shot of the old woman dropping hot wax into the poor mute’s eyes. Consistency could not be expected. Some sequences are tediously slow. However, the images presented, though static at times, have graphic power. And the music, in which this minor complex of anguish and fear and violence is conveyed, is notoriously insistent and dramatic. It may not be sweet, but it is loud.

Marie Powers may be a most accomplished singer and a vivid character actress, beyond doubt, eloquently representing the aging slattern of the title role. But even she looks ridiculously pompous, within the realistic settings of this film, hauling back and singing loudly at three frightened people (who sing back at her) that she’s been fooling them all the time.

As for Anna Maria Alberghetti, in the role of the medium’s little girl who assists her in duplicity and is in love with the feebleminded mute, she, too, has a striking appearance and sings most affectingly, but the necessity of plain communication in trilling song often throws her for a loss. Leo Coleman, as the mute, is spared the trouble of singing, but he slinks and leaps about in such a vigorously ostentatious fashion that he is embarrassing in but another way. Belva Kibler, Beverly Dame, and Donald Morgan are pictorially impressive in client roles.

The production and the musical recording by the Symphony Orchestra of Rome are fine. But, for all that, ‘The Medium’ as a movie is not a valid or substantial dish of tea—at least, not for this reviewer, who finds illustrated music strangely thin.”