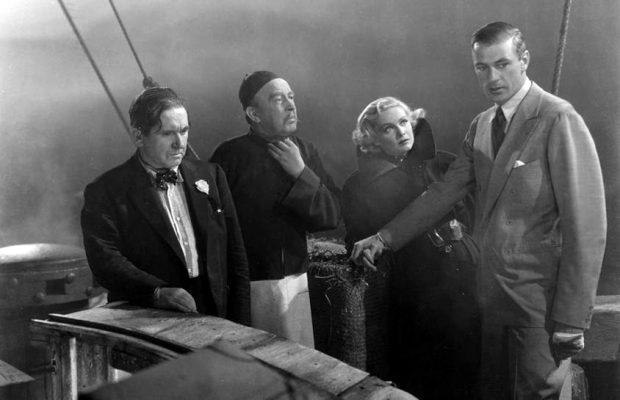 Toronto Film Society presented The General Died at Dawn (1936) on Monday, October 2, 2017 in a double bill with Shanghai Express as part of the Season 70 Monday Evening Film Buff Series, Programme 1.

Toronto Film Society presented The General Died at Dawn (1936) on Sunday, April 10, 1988 in a double bill with Arise My Love as part of the Season 40 Sunday Afternoon Film Buffs Series “A”, Programme 12. 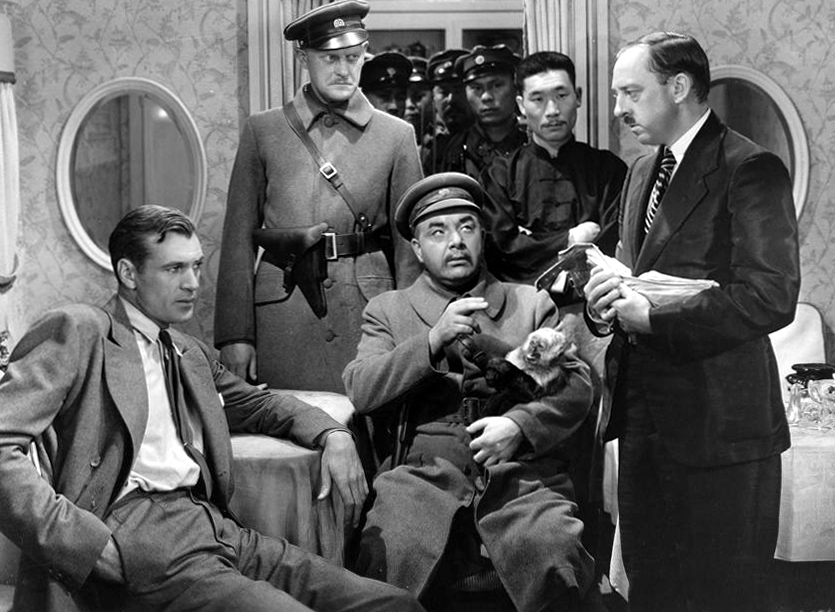 In the 1970 book The Films of Gary Cooper, Homer Dickens writes: “Paramount acquired the services of Broadway’s fair-haired boy, Clifford Odets, to handle the screen treatment of Charles G. Booth’s adventurous novel.  Odets may have thought he was writing an inflammatory piece about oppression, although, actually, he was preparing a new anti-hero for Gary Cooper and another adventure film for his already impressive roster.  During production, the title was called Chinese Gold but, when released, the title became The General Died at Dawn.  The production was top-notch in all departments, and Odets, along with novelist John O’Hara, columnist Sidney Skolsky and director Milestone, became extras—as reporters—in the railroad car sequence at a salary of $5.00 per day.

Said the London Times: “Mr. Akim Tamiroff is both alarming and subtle in the part of General Yang.  It is more difficult to make a hero interesting, but as Mr. Cooper always manages to suggest that his innocence conceals both intelligence and sincerity, so he contrives to give to this innocent part a touch of more reasonable and genuine heroism than it would normally have.  The director, Mr. Lewis Milestone, makes the film move at an excellent pace and the settings are both elaborate and picturesque.”

“The Brooklyn Daily Eagle called the film “a slick and handsome melodrama.  It moves.  In direction and photography it has undeniable class and the acting is up to the demands of the script.  But, like most movies, it is empty of any ideas or characters that remain with you longer than it takes to reach the nearest subway entrance.”  This remark is rather disparaging since I know I spent some time thinking about the film after its viewing.

Merle Oberon was originally cast as Judy Perrie but was too busy with other commitments to start shooting, and was replaced by Madeleine Carroll.

An interesting film comparison was made in Bernard F. Dick’s 1985 book The Star-Spangled Screen: The American World War II Film saying, “Left-wing screenwriters, whether they veered to the extreme left or remained merely left of center, preferred something stronger than allusion: they preferred to make a symbolic connection or draw a meaningful parallel between a fascist and familiar type such as warlord or a gangster.  While Gabriel Over the White House (1933) pictures in science fiction terms what can happen under a dictatorship, The General Died at Dawn shows what does happen; comparison of the two illustrates the difference between a film of political caution and one of political commitment.

And not only does Jeffrey Meyers in his 1998 book Gary Cooper: American Hero, but also TFS programmer Barry Chapman, both recognize that The General Died at Dawn owes something to von Sternberg and Dietrich’s Shanghai Express.  Both films have an uneasy love affair between a man and a woman, who’ve been involved with each other before, on a train to Shanghai that’s attacked and boarded by a cruel Chinese warlord.

So please get ready for tonight’s second trip to China. 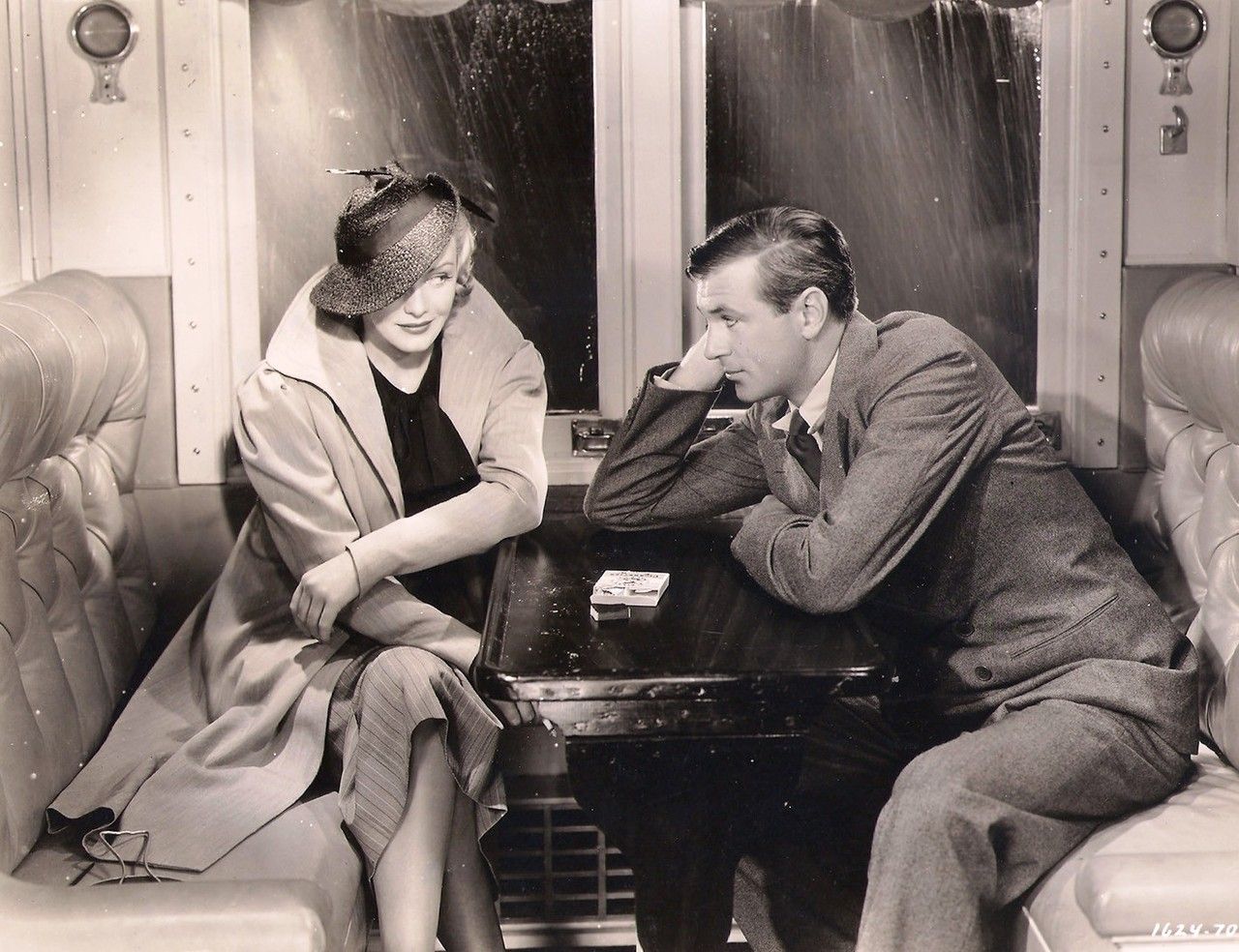 The General Died at Dawn is a milestone production in film history.  Plainly speaking, Lewis Milestone is a hired extra as a reporter in the train sequence together with Hollywood pals Clifford Odets (scriptwriter), Sidney Skolsky (Columnist) and John O’Hara (novelist), receiving the regular rate of $5.00 per day paid to extras in 1936.  An unknown actor, Akim Tamiroff, “a heavy who will be seen a lot in the future” (Variety, September 1936) was nominated for the first Academy Award for a supporting role, losing out to Walter Brennan’s performance in Come and Get It.  Werner Janssen and Victor Milner were also nominated for Academy Awards for best musical score and best photography respectively.  Lesser praise character actors grace the screen, most notably Porter Hall, the snivelling, broken down villain, “if not typed too much is going places” (Variety, September 1936) and William Frawley, who is “engrossingly reckless, insulting and violent” puts on “one of the greatest early portraits of the ‘ugly American’ on record” (Motion Picture and TV Guide).  Offsetting the villainy of the preceding players is that of Madeleine Carroll, a British actress considered the most beautiful blonde in 1930 movies [Prisoner of Zenda 1937, Secret Agent 1936, 39 Steps (1935)].  In short, The General Died at Dawn is one of those rare films boasting both artistic success and box office success.

Clifford Odets, a playwright famed for such politically progressive plays as “The Adding Machine” and “Street Scene”, adapted the screenplay for The General Died at Dawn from an unpublished novel by Charles G. Booth of the same name to create a film tale about an American adventurer aiding a peasant rebellion against a cruel Chinese Warlord.

An article carried in The Daily Worker on August 23, 1937, quotes Odets on the relationship of his screenplays to his left-wing ideas, “Well, I got away with some stuff in The General Died at Dawn”.  Testifying before the House Un-American Activities Committee 15 years later on the strength of the article in question, Odets disclaims the social content of The General Died at Dawn, stating “the whole matter was nonsense because The General Died at Dawn is a picture that starred Gary Cooper and done by Paramount.  There was nothing of any subversive nature in it” (Coop, Stuart Kaminsky, p. 75).  Whether Odets is serving up a message film on the evils of oppression and the cause of the suffering proletariat is obviously a matter of opinion.

What remains uppermost in the memory of film audiences today, however, is that unforgettable line spoken by Gary Cooper to Madeleine Carroll of what might have been, “We could have made beautiful music together.”

To Gary Cooper, already a well-established screen actor in 1936 [Desire, Mr. Deed Goes to Town, The Plainsman (1936)]  The General Died at Dawn is an important film in his financial career.  Finishing off a contractual obligation to Paramount to complete a final two pictures, Cooper presigned a contract with Samuel Goldwyn to produce six pictures in six years at a guaranteed salary of $150,000 per picture.  Paramount demanded a first right of refusal to renew Cooper’s contract.  In the resulting court case, Goldwyn lost exclusive rights on Cooper, agreeing to share the actor with Paramount, while Paramount was ordered to pay the going rate of $150,000 for The General Died at Dawn and The Plainsman.