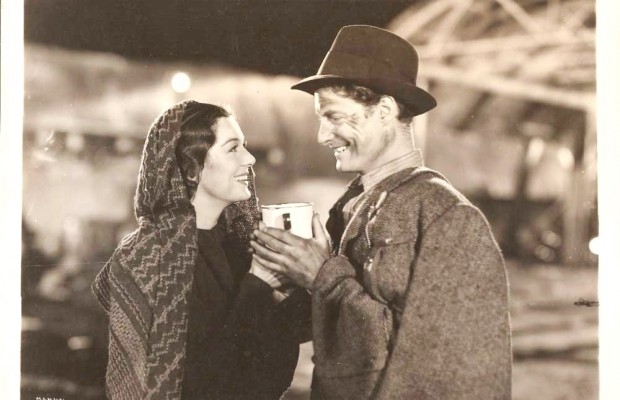 Toronto Film Society presented The Citadel (1938) on Monday, May 8, 1978 in a double bill with The Conquerors as part of the Season 30 Monday Evening Film Buff Series, Programme 10.

“I believe I am now helping to make an extremely fine, if not a great, film called The Citadel.  Into it will go three months’ very hard but very happy work.  Then, after a rest, I will tackle what I hope will be another unusually good film [Goodbye, Mr. Chips].  My argument is that this is more satisfactory than grinding out a couple of hundred performances on the West End stage.”

Early in 1938, he had already advanced far with The Citadel at Denham.  The American actress, Rosalind Russell, who became a true friend, was the heroine, and Ralph Richardson the heavy, drunken cynic of a doctor who, in the film script, dies instead of the wife under a bungled operation by a Harley Street surgeon.  The mining village of Blanelly covered three Denham acres.  Robert, with his usual osmotic process–‘I let things soak into me’–had been wandering about the Rhondda at weekends.  Probably because he felt, deceptively, better than in years, he had not started a film with so much enthusiasm, and he lived with the part in depth.  Upon his dressing-room wall a diagram on squared paper, held a graph of the young doctor’s emotional life, the line curing up or sagging: Robert, in a look, could see what was demanded of him and relate every scene, in its proper intensity, to the rest of the film.  He was merely doing here what he tried to do through life.  Though he might have doubted the full validity of ‘Method’ acting, he wanted to know everything about his man.  Hence his use of the graphs to watch the curve of emotion as well as the choice of his clothes.  Hence, too, his habit of wearing film clothes off the set (just as Macready, in a different world, would wear the pieces of his Henry V armour), so that he might get used to them and avoid a charge that he was appearing in ‘costume’–something he never did in his life.  The clothes he wore at any given moment would be his and nobody questioned it.  You could not trip up Robert in the loops of a random shooting schedule; always he knew where he was and what he should be feeling; what had happened to the man before he came on to the set and what he would do on leaving it.  ‘You never got very close to him,’ said a famous camera-man after his death, ‘because he was the character he was playing for as long as the film lasted.’  Maybe the rigorous standards he accepted help to explain what he asked from others less resolute.

Under King Vidor’s direction, nothing went amiss.  Finally, at the New York showing, and, a little later (Christmas 1938) at the Empire, London, critics were quick in compliment.  C.A. Lejeunne said it was a rare film that could rouse so many people to such a fine rage.  The Manchester Guardian said Robert had added to his charm both depth and humanity: he had done nothing so big.  He valued mosst a long letter from Tyrone Guthrie, seriously critical of the film but pleased by much, and saying: ‘The range of colour, pitch, power, and tempo of the speaking–this, I think, is where you excel.’

In an essay on Vidor, included in Volume V of “The Hollywood Professionals” series, Toronto writer Clive Denton has attempted to compare visual and emotional similarities from apparently dissimilar films by the same, major, director.  This short segment compares element from The Citadel and Vidor’s later Beyond the Forest, starring Bette Davis as Rosa Moline.

“Two scenes in Beyond the Forest when plot situations have an unexpected closseness evoke, of all unlikely pictures, memories of The Citadel.  Rosa’s husband delivers a baby in difficult conditions: the images resemble those of Donat’s Doctor Manson, eleven years removed.  A woman prays for the child and the doctor’s shadow is seen on the wall.  Later, Rosa in Chicago wanders helplessly through the unfriendly night.  Manson had similarly wandered through London, while at low ebb in his personal and ideological  life.  In both instances, the city is dark indeed.  In London, fog; in Chacago, rain.  And in both instances drunkenness is Vidor’s symbol for failure, disappointment, defeat.  Rosa and Manson are not drunk but drunkenness is around them in an almost Dickensian squalor of mean streets and low lighting.  In The Citadel Manson is only temporarily swayed from his vocation.  Rosa, with no vocation, is more seriously lost.  The degrees of despair differ but the visual language is the same.”