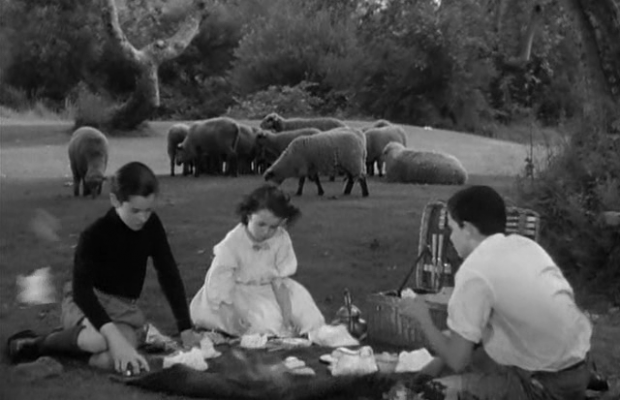 Samuel Goldwyn beckoned March again, and this time under the aegis of sensitive, perceptive, tasteful Sideny Franklin, with whom he had worked in The Barretts of Wimpole Street, March did The Dark Angel, a remake of the silent film Goldwyn had done in 1925 with Ronald Colman.  Lillian Hellman and Mordaunt Shairp prepared an excellent screenplay that extracted all the dramatic values inherent in the piece.  The mounting and production were impeccable, as in all Goldwyn films, and March’s performance proved one of his most popular to date.  Merle Oberon, who had developed from a sloe-eyed exotic into a sensitive and feelingful actress, was co-starred along with Herbert Marshall, and both gave excellent accounts of themselves…

Seen today, the film had its trite aspects, and the romantic situation seems forced, overly sentimental, artificial.  The excellent acting and sincere direction, as well as the aforementioned tasteful production values, however, make the sum total more than attention-holding, if no longer as moving as it once was.

Even if there is just a hint of overstatement in Mr. Goldwyn’s belief that The Dark Angel is destined to achieve screen immortality, the impressario’s first photoplay of the season is a happy adventure in sentimental romance.  Lillian Hellman and Mordaunt Shairp have written a highly literate screen adaptation of Guy Bolton’s play, skirting all the more obvious opportunities for tear-jerking and overemphasis, and telling the story with feeling and admirable good taste.  The photoplay is in the handsome Goldwyn tradition of visual excellence and, if you know your cameramen at all, you quickly guess that the superb clarity of the photography is the work of Gregg Toland.  If you are thoughtful enough to bring along a spare handkerchief, you will find the new film an engaging sentimental journey into marital romance.