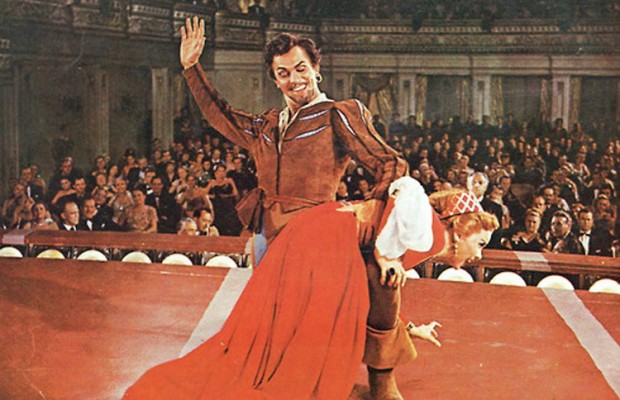 Toronto Film Society presented Kiss Me Kate (1953) on Sunday, January 22, 1989 in a double bill with The Merry Widow as part of the Season 41 Sunday Afternoon Film Buffs Series “A”, Programme 4.

Made at MGM in the studio’s musical hey-day, Kiss Me Kate is a rollicking, roistering film version of Cole Porter’s Broadway musical adapted from Shakespeare’s “Taming of the Shrew.”  In the fashion of the early 50’s, however, the film version had to launder some of the more suggestive lyrics used int he stage version.  The original first refrain of “Too Darn Hot”, for example, was as follows:

According to the Kinsey report
Ev’ry average man you know
Much prefers to play his favorite sport
When the temperature is low.
But when the thermometer goes way up
And the weather is sizzling hot
Mister Adam
For his madam,
Is not,
‘Cause it’s too, too
Too darn hot,
It’s too darn hot.

In the film, this refrain was changed to:

According to the latest report
Ev’ry average man you know
Much prefers his lovey-dovey to court
When the temperature is low. (etc….)

In “Where Is the Life That Late I Led?”–a newly-married rake’s mournful recollection of happier bachelor days–the lines “And lovely Lisa, I thank you, Lisa/You gave a new meaning to the learning tow’r of Pisa.” were also removed.  Instances of such changes can be found throughout the film and detract somewhat from the wit and imagination of the original Cole Porter lyrics, as well as destroying his characteristically complicated internal rhyming patterns.  As Ted Sennett writes in his 1981 book Hollywood Musicals: “Kiss Me Kate raises the question of Cole Porter’s music on the screen.  Although the score is one of the composer’s brightest creations, it may possibly be too witty to succeed as movie music.  The uncluttered charm of Irving Berlin or the gentle lyricism of Jerome Kern work better in films.  (The screen requires) songs that are simpler, less intricate, more unabashedly melodic than those of the stage.”

Another problem vexing Kiss Me Kate is undoubtedly its leading romantic couple, Kathryn Grayson and Howard Keel.  They are simply not on a par with the musical couples of the thirties and forties.  Sennett particularly condemns Grayson: “Endurable in bland heroine roles, she was clearly out of her depth playing a quick-tempered stage star, and she transformed the leading lady…into a petulant scold.”

Much of such criticism, however, is the result of hindsight.  Looking back over 20 years, we can see the MGM’s stage adaptations began to lose their momentum in the late 50’s, feeling the impact of spiralling costs, dwindling markets, and the inroads made by television.  In 1989, musicals seem on the verge of extinction.  Small wonder if a few of the signs of the approaching doom mark a film made as late as 1953.

All such flaws seem to have been invisible to the film’s contemporary audience, however.  Ann Miller won special praise as the second romantic lead.  Bosley Crowther wrote in the New York Times: “The hoofing she and Tommy Rall do to ‘Why Can’t You Behave?’ brings a lift where the picture needs it, and when she and her ‘suitors’ charge in and knock off ‘Tom, Dick and Harry,’ the scenery shakes and the spirits soar.”