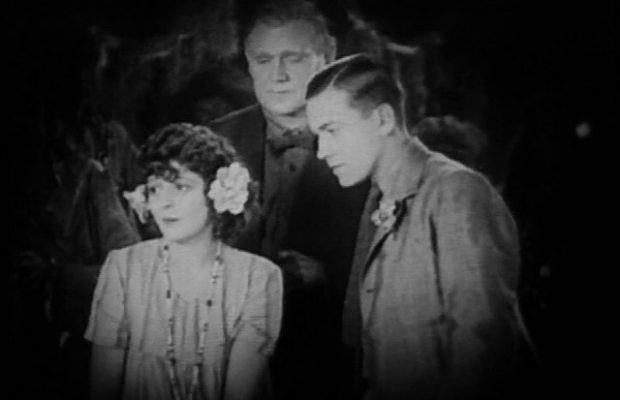 As these notes go to press we have not yet seen The Idol Dancer.  What little we know about it we hereby pass along to you in the quotations from the reference books which aroused our interest and led to our deciding to book this film.

The Museum of Modern Arts catalogue offers the following program note:Always in search of fresh film locales, Griffith spent the winter of 1919-20 in Florida and the Bahamas where he made two minor pot-boilers of which this was the first. Its thin and improbable story seems improvised to take advantage of the background.  The Idol Dancer offered the film public of 1920 the fresh charm of its youthful leads, Bitzer’s superb Caribbean and New England photography, and a confused theme of Puritanism succumbing to the Tropics, then–apparently–triumphing in the end.

Edward Wagenknecht’s book “The Movies in the Age of Innocence” (1962), in the chapter devoted to D.W. Griffith, is a little more explicit and considerably more sympathetic:

In 1920, Griffith came out with Way Down East and three program pictures, The Greatest Question, The Idol Dancer, and The Love Flower, all released through First National…  Both The Love Flower and The Idol Dancer had tropical settings; the exteriors were made int he Bahamas, and Griffith and his company were very nearly lost at sea in the enterprise…

The Idol Dancer concerns missionaries and traders in the South Seas and a gin-soaked derelict (Richard Barthelmess) and a sickly, high-minded, anaemic youth (Creighton Hale), both in love with the luscious White Almond Flower (Clarine Seymour).  His love redeems them both–her from a heathenism and him from his atheism and the curse of drink.  Although The Idol Dancer carries special interest as Clarine Seymour’s last film–she died before its release, and it gave her the nly opportunity she ever had to reveal her full capacities–it is the fashion presently to abuse it and even to suggest that Griffith probably did not direct it personally, but I have Richard Barthelmess’s word for it that he did.  In quality it is certainly at least an average Griffith program picture.  It is true that the “orgy of destruction” engineered by the rascally white trader is a pretty forced means of working up an exciting ending, with the opportunity for another Griffith last-minute rescue (this time the rescuers come in paddle boats); but the conflict between Christianity and paganism is a sound dramatic motif, the background and the native customs are colorful, and certainly Clarine’s White Almond Blossom is good enough for any picture.  Comic relief is furnished by the determination of the only white boy on t he island to force his native friend to were pants.  He finally gets them on him but they come down during the closing excitement, and it must be admitted that he looks much better without them.

CLARINE SEYMOUR had made her debut under Griffith along with Carol Demptster in a film called The Girl Who Stayed at Home (March 1919).  Wagenknect says of this film:

Miss Seymour was the real discovery.  A tiny girl with enormous eyes, she was as dark and vivacious as most Griffith heroines had been blonde and wistful, a delightful girl, of excellent character, whom everybody in the studio loved; but she died on April 25, 1920, on the threshold of what would almost certainly have been an important film career.

Mr Wagenknecht has further to say on Clarine Seymour in the course of a footnote in which he is correcting a few errors in Seymour Stern’s article in Films in Review (Vol X, 1959); “Biographical Hogwash”–a review of “Star Maker: The Story of D.W. Griffith” by Homer Croy:

There is no excuse whatever for his attempt to make a mystery of the death of Clarine Seymour; she died after an operation for strangulation of the intestines, and there was no mystery about it.  Neither had she “been assigned the leading feminine role (Anna Moore) in Way Down East.”.  Nobody was ever Anna Moore except Lillian Gish; Clarine played the role afterwards taken over by Mary Hay, and can still be seen in some of the long shots.

RICHARD BARTHELMESS was born in New York City on May 9, 1897.  He came to the screen via the stage, making his film debut opposite Alla Nazimova in War Brides (1916), the screen version of the successful play they had been appearing in.  He was a popular leading man on the Famous Players-Lasky lot for nearly three years before Griffith signed him up early in 1919.  For the next year or two he appeared in many of Griffith’s films, beginning with the abovementioned The Girl Who Stayed at Home, and including most notably Broken Blossoms and Way Down East; after which he left to form his own company, which, starting with Tol’able David (1921), turned out successful films for nearly ten years.  He dropped out of pictures in the mid-1930’s returning later to do small roles in a few films, the last of which was The Spoilers (1942).  He died at his summer home in Southampton, Long Island, on August 17, 1963.