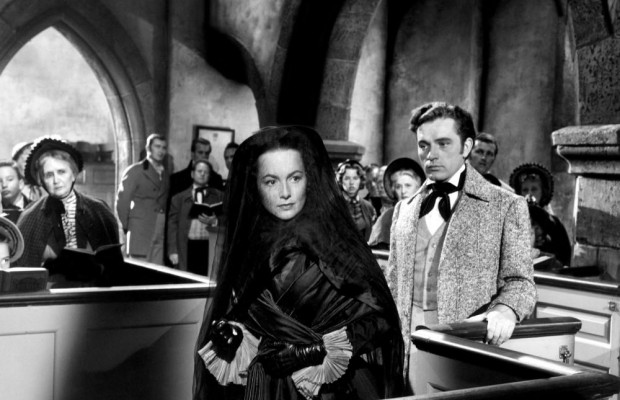 Olivia returned to the screen in My Cousin Rachel (1952), a handsome and evocative adaptation of Daphne du Maurier’s novel, co-starring Richard Burton in his American film debut.  As the mysterious and alluring Rachel, who may or may not be a murderess, Olivia was at her most ravishing.  Olivia again received good reviews for her work, including one from George Cukor, who was originally set to direct the film but was replaced by Henry Koster.

“One of the compliments I treasure most came from George Cukor who, long ago, phoned me after seeing the film and, to my gratified surprise, said he thought my work as Rachel ‘brilliant.’  Wasn’t that wonderful?” Olivia recalled.

The Women of Warner Brothers: The Lives and Careers of 15 Leading Ladies by Daniel Bubbeo (2002)

(Spoilers): My Cousin Rachel (1952), despite its name and despite its having been written by the celebrated female author of books for women, Daphne Du Maurier, is an example of a woman’s film that has a man as the central narrative figure of audience response and identification.  The story begins with an ominous warning note.  Out on the brooding moors, a mature man is calling the attention of a young boy to the dangling corpse of a newly hanged culprit.  The man tells the boy to take his time looking and to never forget.  That, he warns, is what can happen to you.  “A moment of passion, and you pay with your life.”  This is a warning that might normally be given to a woman, for whom a moment of passion can result in an unwanted pregnancy or shame of some other sort.  Although the incident involves two males, it is definitely a woman’s film opening.

When this youngster grows up, he becomes Richard Burton.  His advisor on the moors, who is actually his cousin, has now become his loving “parent” and guardian, since Burton’s own family members are all dead.  The two cousins are deeply attached.  The older man is crippled and has to walk with a cane, so that he visually represents an impaired adviser, a kind of imperfect male.  Since he is neither strong nor vital, nor a natural parent, he is fundamentally nonmasculine in the traditional sense of that term.  Burton, in his first major American film role, is presented as a callow youth, not yet experienced in the ways of the world.  The two men are almost virginal, and they in no way represent vigorous masculine figures.  The opening scenes of the film present a world of clothing, furniture, and concern with moral behavior and good health.  (This is particularly true since My Cousin Rachel is a lavish costume film.)

The crippled parent figure goes off alone to take the sun in Italy, which is supposed to be good for his health.  Italy is a movie territorial metaphor for sex.  When movie characters go there from America, England, Scandinavia, they always find sun, warmth, love, and above all else, sex.  It is the place where characters go to relax their bodies, their tensions, and their morals.  In Italy, we have seen poets become healthy (Barretts of Wimpole Street, 1934 and 1957), spinsters get laid (Summertime, 1955), virgins get married (Gaslight, 1944), independent and willful females bear illegitimate babies (A Woman Rebels, 1936), whole families relax and begin relating (Enchanted April, both 1935 and 1992), and “dead” couples get reborn (September Affair 1950).  Sure enough, the parent figure soon sends back word that he has married a beautiful woman whom Burton is to refer to as his cousin Rachel.  Almost before Burton has absorbed this, word comes that his wealthy parent figure is dead.

The film then unfolds like a traditional Gothic novel in which an innocent young girl invades the territory of a darkly suspicious, older person of the opposite sex.  Burton is Eyre to Olivia de Havilland’s Rochester.  After journeying to Italy to find out what really happened, he finds himself smitten with his cousin, bringing her back to England with him.  Once home, he is seduced by her experience and sophistication.  His fever for her makes him incautious.  (“A moment of passion, and you pay with your life.”)

The high point of this passion is one of the few sequences in which Burton is physically active, as he climbs into de Havilland’s room via a balcony.  The moonlight pouring in on them, he drapes her naked body with all his family jewelry.  She is overwhelmed, and they make love in front of the fireplace.  After this love scene, Burton, overstepping himself in his youthful inexperience, announces at a family gathering that he will marry his cousin Rachel.  Rachel cries out, “Are you out of your mind?”  In an altercation between them later, he, like a young woman, goes crazy and tries to strangle her when he realizes that the lovemaking was not the same thing to her as it was to him.  (“…but that was because you had given me the jewels…,” she says.)

Burton now begins to believe that de Havilland is trying to poison him for his money, as she keeps preparing him a tisane she makes herself.  Close to dying, he rallies himself as in his fever dreams he imagines they are getting married when he recovers.  After he’s well, however, Rachel lets him know that they aren’t.  These plot maneuvers become meaningless, and in the end, Rachel dies because of Burton’s mistrust.  The film ends with Burton brooding stylishly around the cliffs, looking down on stormy water, saying, “Rachel, Rachel, my torment, were you innocent or were you guilty?”  (We found this a highly unsatisfactory ending back in South Dakota where I first saw it.)

My Cousin Rachel is a movie about women, written by a woman for other women, and although the central figure who lives to the end is a man, he is a stand-in for female feelings.  Audiences are not asked to involve themselves with Rachel, but only to see her as enigmatic, the way he does, and to be confused as to who and what she really is.  Burton is in a position of dependency and innocence of a sort usually associated with a female character.

Over the years, the woman’s film has been down at the bottom of everyone’s critical ash heap.  When a film stars a woman in a melodrama, it is taken less seriously than if it stars a man.  Making these women’s films with men in the central roles was a way of elevating the status of the weepie, but also a way to draw in male viewers.  Or perhaps to trick the critics into better reviews.  Or maybe just to vary a format.  Whatever or whichever, they are again examples of movies in which the woman’s concerns are disguised in masculine clothing.  They ennoble the woman’s concerns by giving them to men.  They are different from role reversals in that there is no return to “normalcy” at the end, and the men and women are not trading places in an outer world.  Instead, they treat a man’s life as if it were the same as a woman’s.

Click on Grand Old Movies: Blogging about Hollywood’s golden-age films to read a further review of My Cousin Rachel.