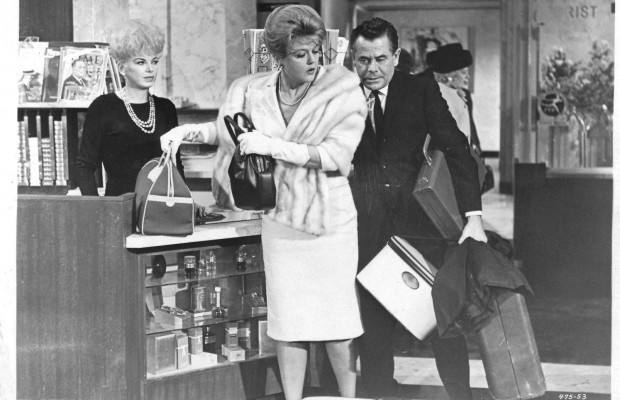 Toronto Film Society presented Dear Heart (1964) on Sunday, April 11, 2004 in a double bill with The Secret of Convict Lake as part of the Season 56 Sunday Afternoon Film Buff Series, Programme 7.

The story concerns two lonely people arriving in New York and putting up at the same hotel.  She is a small-town postmistress, utterly and refreshingly uncynical although life would seem to have passed her by.  She has come to attend the annual Postmasters’ Convention, eager for adventure in New York, happily allocating first names to all the hotel staff, and sending herself little “Welcome” messages to show the folks back home.  A character, you might think, liable to prove tiresome but not in the hands of Miss Page.  He, played expertly by Glenn Ford, is a greeting card salesman now about to tie himself down to a widow he has met on his travels fully equipped with a beatnik son she can’t manage.

Ford has come to New York to look for an apartment, and he soon bumps into the postmistress, even landing up at the convention. Here are a number of well-known faces on hand, including Mary Wickes and Alice Pearce, as two endearingly formidable spinsters, who wish to commandeer Miss Page’s time. And then Angela Lansbury appears as the widow, giving a marvellously bitchy performance.

Tad Mosel, who wrote Dear Heart, won a Pulitzer Prize for his play “All The Way Home”, a stage adaptation of James Agee’s “A Death in the Family”.  And Delbert Mann, whose eye for sympathetic observation won him an Academy Award at the Palme d’Or for his films, directional debut, Marty (1955).  In the 60s he turned to directing romantic comedies and occasional adventure yarns, Lover Come Back (1961), That Touch of Mink (1962), A Gathering of Eagles (1963) and The Pink Jungle (1968).  From the late 1960s through the late 1980s he was also directing numerous TV movies, including adaptations from classics like Heidi (1968), David Copperfield (1970), and All Quiet on the Western Front (1979).