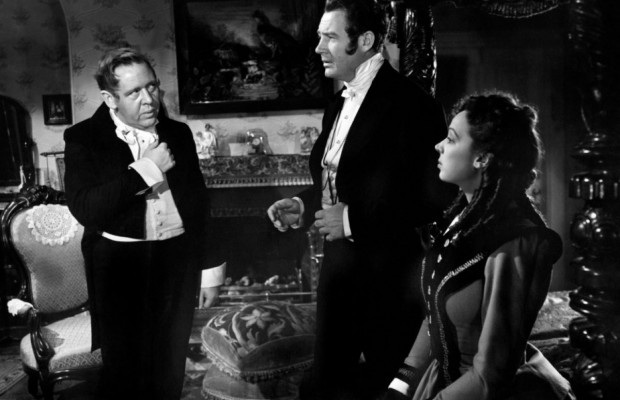 Toronto Film Society presented Forever and a Day (1943) on Monday, February 12, 1979 in a double bill with The Mudlark as part of the Season 31 Monday Evening Film Buff Series, Programme 6.

Forever and a Day was cooperatively made by seven directors and producers, twenty-one writers and seventy-nine actors and actresses.  It was conceived as a tribute to Britain’s great courage, by her nationals and her friends in Hollywood–all who took part gave of their services for free and profits realized in the U.S.A. went to the National Foundation for Infantile Paralysis.  In Britain, numerous war charities were assisted.

Structured episodically, the film traces the history of one English family from 1804 to 1943.  It is as interesting as a chronicle novel, and though the interest is necessarily scattered rather than concentrated by the episodic treatment, the action is well-sustained, and the fighting spirit of the Old Admiral (C. Aubrey Smith) who built the house in which the succeeding generations live, forms a connecting link.  In the end, it is not bricks but the valiant spirit which survives from one century to another.

For so numerous a cast it is not possible to detail all the fine performances.  The second, mid-Victorian episode, is a bright bit of comedy in which Charles Laughton and Jessie Matthews are involved and Sir Cedric Hardwicke and Buster Keaton are great fun as a pair of plumbers installing a bathtub.  The young Ida Lupino gives a lively performance as a maid in another episode.  There is a splendid scene with Gladys Cooper and Roland Young as the mother and father of a first World War hero informed, on a festive evening, of sudden tragedy.

Each sequence shows care and fine casting, directing, and writing.  All in all, a marvellous film.