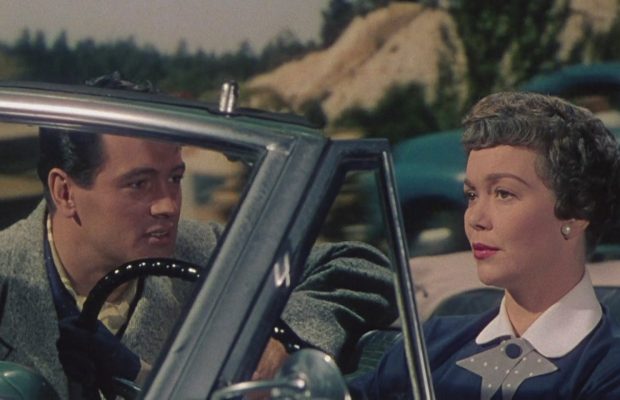 Toronto Film Society presented Magnificent Obsession (1954) on Monday, April 26, 1982 in a double bill with A Bill of Divorcement as part of the Season 34 Monday Evening  Film Buffs Series “B”, Programme 10. 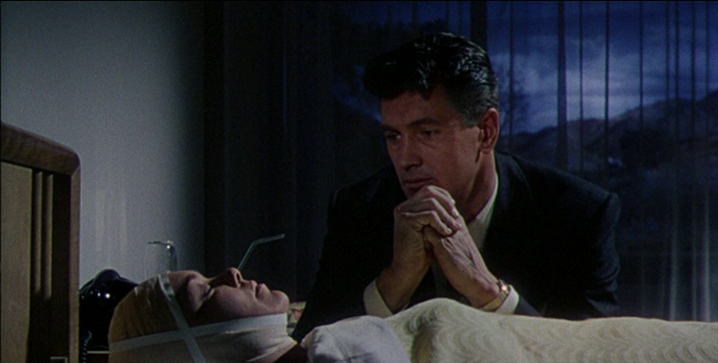 Film Buffs “A” began last fall with a double fill of “weepies” from 1942, Random Harvest and Now, Voyager.  Film Buffs “B” now ends with another from a decade later, Douglas Sirk’s Magnificent Obsession.  There is a difference, however: this is a much more problematical picture.  Film scholars (as distinct from cultural historians) dismiss the two pictures of 1942 as artistically valueless, popular trash; in Sirk’s Magnificent Obsession they see artistic value of a high order, wile dismissing the earlier version made in 1935 by John M. Stahl, with Irene Dunne and Robert Taylor.  Thus spake Andrew Sarris, who will forgive a director anything, so long as some marks of the auteur are present, and some evidence of high style: “Even in his most dubious projects, Sirk never shrinks away from the ridiculous, but by a full-bodied formal development, his art transcentds the ridiculous, as form comments on content.  Where John Stahl transcended the lachrymose dramas of Imitation of Life and Magnificent Obsession through the force of his naive sincerity, Sirk transformed the same plots into hilarious comedies through the incisivenss of his dark humor.”  So Sirk himself has described the original story of Magnificent Obsession  as “a combination of kitsch, and craziness, and trashiness”; but in almost the same breath he compares his version of that kitsch to Euripides’ Alcestis (on which, incidentally, T.S. Eliot did base The Cocktail Party).  More literally-minded viewers might disagree with Sarris’ and Sirk’s belief that Sirk markedly transformed the kitsch and the trashiness.  Sirk’s admirers have always seen his special strength as an ability to project his own view of the world from behind ostensibly conformist, Hollywood values; and left-wing critics (responding to Sirk’s own left-wing sympathies) have applauded his satirical treatment of the values of the upper bourgeoisie.  Less ideological viewers have been unable to see him separating himself from those values.

From the moment Chopin’s etude (“So Deep is the Night”), accompanied by heavenly choir, booms from behind the opening credits, we are presented with the quintessence of kitsch, a very literal example of melodrama.  Magnificent Obsession centres upon a playboy who devotes his life to good works (because his worthless life has been saved by the death of a philanthropic doctor? or because he has designs on the doctor’s widow?  The point is characteristically unclear).  He establishes “contact with the source of infinite power,” returns to medical school, and eventually restores the sight of the heroine, whose blindness he had caused in the first place.  It is the kind of film, in some of its details exactly similar, that Holden Caulfield saw in The Catcher in the Rye, and warned his readers, “Don’t see it unless you want to puke all over yourself.”  It is based, of course, on a novel of Lloyd C. Douglas, one of the most popular of “religious” bestsellers, which in turn has its roots in the most runaway of all bestsellers, Charles Sheldon’s In His Steps (1896), in which a number of people decide to base their lives,  for ayear, on their answer to the question “What would Jesus do?”  Sirk’s Magnificent Obsession  is riddled with bogus “religious” allusion, as when Hudson announces his intention of putting his “magnificent obsession” into immediate practice.  Otto Kruger holds him back–“This is dangerous stuff.  One of the first men who used it went to the Cross at the age of thirty-three!”  There is a touch of DeMille about Sirk here, mocking the Norman Vincent Peales at the same time as he gathers in their adherents.

Sirk’s career began in the Weimar Republic (he was born Danish) as a theatrical director.  He entered the German cinema in 1934, and came to the United States in 1937.  Whether we see him as a dark comedian or a positive-thinking huckster, the centre of his achievement is contained in a number of melodramas of the 1950s: Magnificent Obsession, All That Heaven Allows (1955), Written on the Wind (1956), The Tarnished Angels (1957), Imitation of Life (1959), films which Rainer Werner Fassbinder has acknowledged as the basis of his own glossy anatomies of upper class society in contemporary Germany.  Whatever Sirk lacked, he had style in abundance.  Decor, costume, meticulousness of detail–these obsessed him, but, believe me, they were a magnificent obsession.  (Today, incidentally, is Douglas Sirk’s eighty-second birthday).