Toronto Film Society presented Rhubarb (1951) on Sunday, November 12, 1977 in a double bill with Come and Get It as part of the Season 30 Monday Evening Film Buffs Series, Programme 3. 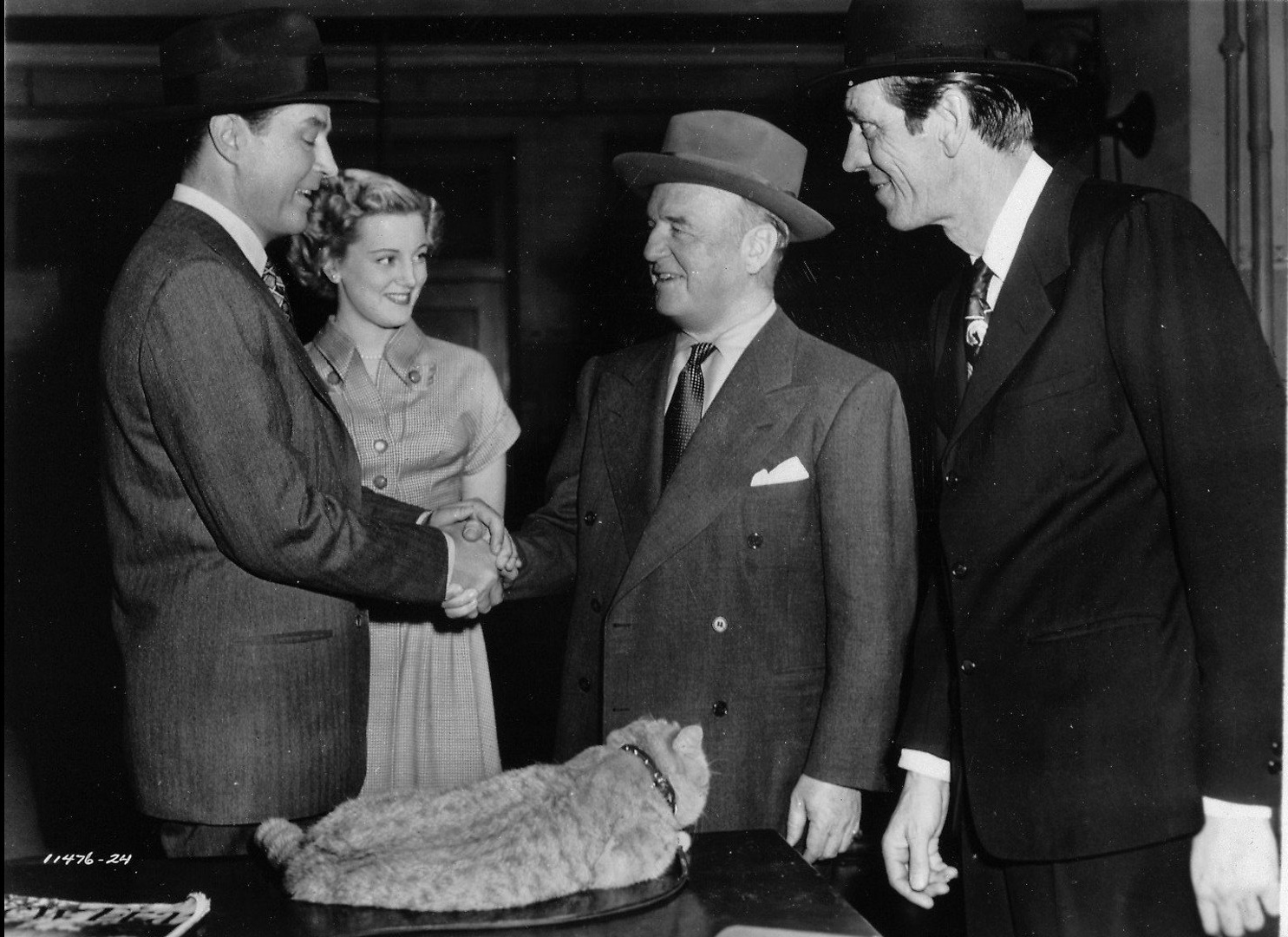 For as long as cinema has existed, animals have appeared on the screen. There have been many successful films with a number of canine stars: Rin-Tin-Tin; Lassie; and Asta, co-star in The Thin Man series—all inveterate scene-stealers, to name some of the most celebrated. Horses have also had their share of star status: Black Beauty, National Velvet; Smoky, the Flicka films; not to mention the performing Trigger. Cats, on the other hand, are often dragged about as if they were inanimate objects. They hardly ever look happy on the screen. The white Persian in Stroheim’s Queen Kelly is a classic example; like all those pulled around by glamourous women for ornamental effect, he was, in fact, a picture of misery. Doubtless because of superstition, many are presented as sinister figures. Cats have long been used, as the late Walt Disney notes in Robert Fields’ book on his art, “to symbolize evil”, and nowhere, of course, more persistently than in animated cartoons, whether by his own or other companies. Alone among domestic animals to have retained their spirit of independence, cats do not willingly submit or enjoy performing. It is perhaps useless, not to say unkind, to subject them to studio discipline, and probably the best way to get satisfactory portrayals, showing their intelligence, delicacy, and dignity, is to film them like wild animals in documentary; that is, in congenial surroundings and with sympathetic understanding.

One of the few films in which a cat has had to play a leading role is Rhubarb, and director Arthur Lubin (of Francis, the talking mule fame) has managed to get a very winning performance indeed. Paramount’s cat has it all over Universal’s rhetorical jackass, Francis, being an animal content to grin wickedly and more or less keep his mouth shut. He is not your usual, run-of-the-mill house pet. The furry protagonist of H. Allen Smith’s comic novel was a snarling, spitting tom whose fighting spirit so appealed to a hard-headed millionaire that he willed the animal no less than $30,000,000. plus a baseball team called the Brooklyn Loons. Although Paramount’s cat is a bit toned down from the scrappy protagonist of Smith’s novel, he is certainly one of the most winningly aggressive heroes ever to slink out of an alley.

Dorothy Reid and Frances Cockrell, the scenarists, have stuck closely to the story and passed on some of Mr. Smith’s snappiest lines to the cast, who respond sportingly. Ray Milland is the energetic, slightly sheepish guardian of the hero. Jan Sterling is good as his sweetheart, who combats an allergy to Rhubarb, and Gene Lockhart, William Frawley, Elsie Holmes, and a colourfully battered assortment of Damon Runyon types do very nicely in minor roles.

The director, Arthur Lubin, is certainly one of Hollywood’s best judges of public taste. His Abbott and Costello comedies; Francis, the talking mule films; and Mr. Ed television series were immensely successful. Perhaps more choosy viewers may have a difference of opinion about that, but Lubin feels that of his sixty-nine or so films, only “eight have been miserable flops,” which is a very good record indeed. In a 1973 interview with Charles Flynn and Todd McCarthy, he states, “They try to spot a director out here (Hollywood); put him in a category. He’s drama, he’s this, he’s that. And, at the moment, I’m an animal director. Unfortunately. Because I wanted to do a picture, last year at MGM, that I thought I was right for. And they told my agent, ‘No, no, it’s not for Lubin. There are no animals in it.’” He supposes having done five mule pictures and six years of Mr. Ed, it’s a natural he would be classified that way. At the time of the interview, he was involved in a pilot series about a cat, based on his earlier film, Rhubarb. He admits, “I know, once I start that, they’ll say, ‘There goes Lubin with his animals again.’ But I say, ‘Well, it pays well!’” 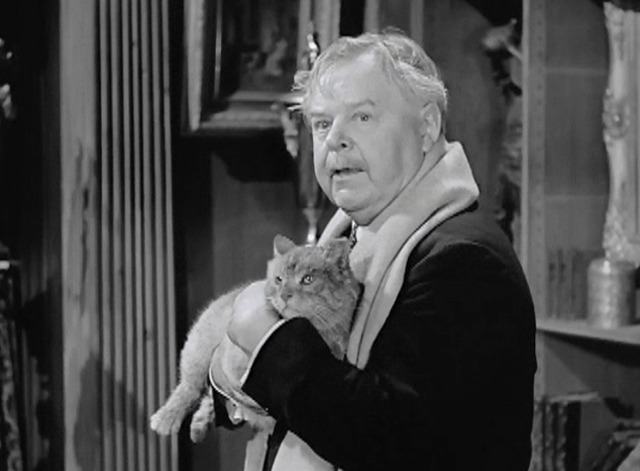 Rhubarb’s eccentric cat owner, Thaddeus J. Banner, is played by Gene Lockhart, born July 18, 1891 in London, Ontario. Lockhart, who showed an early interest in music and performance, was educated in Canada and, for a time, London, England, where his father was touring as a tenor with Toronto’s 48th Highlanders’ Regimental Band. Lockhart himself began singing in public concerts on his family’s return to Ontario, often appearing on the same bill as the Cobourg-born, Toronto-raised Beatrice Lillie. Wikipedia mentions, but does not go into any details of, his stint playing for the Toronto Argonauts football team.

In his mid-twenties, Lockhart went to America to give Broadway a try, landing his first acting gig in 1917. It was the beginning of a long stage career that included introducing the character Uncle Sid in the Theatre Guild’s 1933 production of Eugene O’Neill’s comedy Ah, Wilderness!, co-starring George M. Cohan, and culminated in 1949 when he took over the starring role of Willy Loman from Lee J. Cobb in the original New York production of Death of a Salesman. From the late-1910s to the early-1930s, Lockhart spent his “downtime” writing articles for theatrical magazines and a weekly column for a Canadian publication, coaching members of New York’s Junior League in dramatics, lecturing on dramatic technique at the Julliard School of Music, stage directing, performing on radio programmes, and appearing in at least one silent movie, the 1922 version of Smilin’ Through. He also penned the books and lyrics for two musical revues. The first, The Pierrot Players, toured Canada in 1919 and introduced the hit ballad “The World is Waiting for the Sunrise” (words by Lockhart, music by Hamilton-born Ernest Seitz). The song would go on to be recorded by Ted Lewis, Benny Goodman, and Duke Ellington; in 1951, an up-tempo version by Les Paul and Mary Ford became a million seller. Despite his gruelling schedule, Lockhart complained, “I don’t get thin”. Indeed, his roly-poly physique and twinkling blue eyes were his most defining traits through the more than 125 sound films he appeared in, starting with RKO’s By Your Leave (1934). Several of his featured films became Golden Age classics, including Algiers (1938), which gained him an Oscar nomination; His Girl Friday (1940); One Foot in Heaven (1941); Madame Curie (1943); Going My Way (1944); and Miracle on 34th Street (1947).

Lockhart married English actress and musician Kathleen Arthur in 1924. They had one child, daughter June Lockhart, born in New York in 1925. June went on to appear in dozens of movies and earned television fame in the 1950s and 1960s with starring roles in Lassie, Petticoat Junction, and Lost in Space, in addition to guest-star roles in scores more programs. Both she and her father received two stars apiece on the Hollywood Walk of Fame for their work in movies and TV. June Lockhart, now in her mid-90s, lives in California. Gene Lockhart died of coronary thrombosis in Santa Monica in 1957.

Two other Canadians show up in bit parts in Rhubarb: Stanley Orr, playing the Newspaper Reporter, was born on April 7, 1887 in Oakville, Ontario; and Gus Taillon, born in Ontario on October 11, 1887, portrays the Sexton. They join a host of other uncredited actors, two of whom—Paul Douglas as Man on Park Bench and Leonard Nimoy as Young Baseball Player—went on to major stardom. Orangey the cat, who stars as Rhubarb, went on to play the cat in Breakfast at Tiffany’s. In addition to a half-dozen other film credits, he had a successful TV career, starring in Our Miss Brooks and guest starring in Alfred Hitchcock Presents, The Dick Van Dyke Show, The Beverly Hillbillies, My Favorite Martian, Batman, plus a memorable episode of Mission Impossible. He was owned and trained by legendary animal trainer Frank Inn.