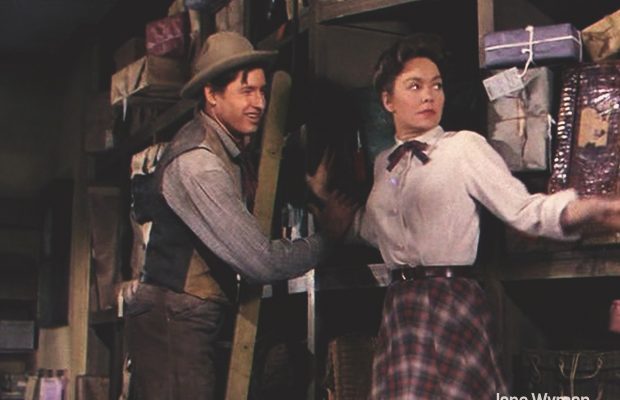 Toronto Film Society presented The Story of Will Rogers (1952) on Sunday, February 17, 2019 in a double bill with Mr. Skitch as part of the Season 71 Sunday Afternoon Film Buffs Series, Programme 5. 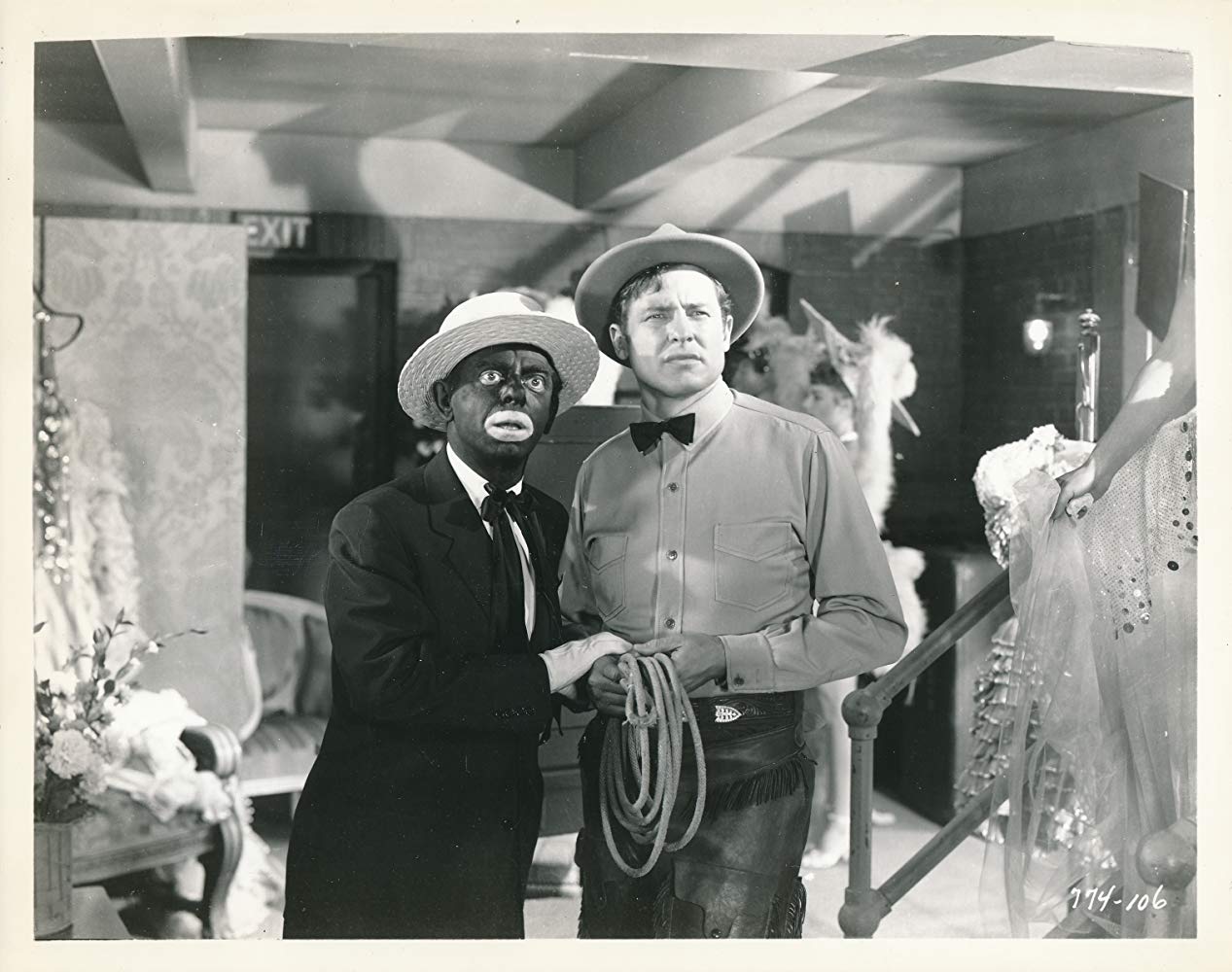 I became interested in Will Rogers after TFS’s 2013 screening of Steamboat Round the Bend which prompted me to read his biography by Ben Vagoda.  Truly, it’s quite amazing what someone can do with his life, considering when, as a young man, Rogers biggest interest was perfecting the physical skill of lassoing.  But with this skill, he was able to first join rodeo shows, move on to vaudeville, which lead to the Ziegfeld Follies on Broadway while finally ending up in pictures in Hollywood.  His perseverance brought him fame and fortune.

He was born in Oologah, Indian Territory (now Oklahoma) on November 4th, 1879.  He was a quarter Cherokee and considered himself Indian as most mixed-bloods of that era did.  His father was wealthy, at one point owning 60,000 acres of land.  As with many fathers and sons, there was conflict between the two, mainly because the two men were pulling in different directions when it came to what each wanted for Will’s future.  Will started roping before he was seven, practicing endlessly on an oak stump in his backyard and eventually his father let him help rope calves for branding.   This skill was how Will broke into show business, first with cowboy shows and eventually trying his luck in New York where he became a success.  It wasn’t just his roping act that made him a Broadway star, it was also his personality, his witticisms and his humility.  It was also a dichotomy that people thought he was a Cowboy when in reality, he was truly an Indian.

Besides being a world-famous film star, Rogers was also known as a political pundit and philosopher, humourist, lecturer and writer.  One of his books, “Will Rogers’ Illiterate Digest”, published in 1924 is chock full of his opinions, from “Settling the Corset Problems of America” to “Helping Girls with Their Income Taxes” to “Settling the Affairs of the World.”

It’s been a few years since I read Vagoda’s biography or watched today’s film, but I remember thinking that the meeting between Will and his wife Betty went a bit differently than depicted in the film.  In Betty Rogers biography of her husband, she states that she first saw, not met him in 1900 while sitting at the train station, which is where they meet in the film.  It was a couple of nights later at a dinner which they were both invited to when they first exchanged words.  Both were the same age, 21, when they met and for several years were just friends, with Will traveling around to make his living, not marrying until they were both 29.  The wedding took place in Rogers, Arkansas, Betty’s home town, and from there they headed off on a dazzling honeymoon to make up for lost time.

What is unique about this filmed biography, is that Will Rogers’ eldest living son, Will Rogers Jr. plays his own father, something that stayed in the forefront of my mind while watching the film.  I continually wondered what he was thinking during many of those scenes.

Before quoting what writer and personal friend Homer Croy wrote in the forward of his 1953 biography of Will Rogers, I want to say that I believe the overwhelming impression most people have of Rogers is that he was a good man who was loved by the masses.  I think this is basically accurate, but no one is loved by all and Rogers had some negative traits just like anyone else, along with prejudices that reflected the times he lived in, and which he was not able to rise above, despite many of his insights.

Croy wrote, “I was astonished to find how people disagreed on him.  I found that he had many enemies, people who said bitter and acrimonious things about him; some who called him a faker and pretender; and some who found his humour not at all to their liking.  Sometimes, as I went from one to another, I could hardly believe they were talking about the same person.

I must bring out another point, and this was how little, during the time I knew him, I appreciated his greatness.  I knew he was unique, but I thought vaguely that this was ‘just his way.’  I saw his rough clothes, heard his high-pitched laugh and his banter, and thought of him as ‘carrying on.’  I didn’t appreciate his philosophy, either.  Sometimes I thought he didn’t know what he was talking about, and that he wasn’t being very funny today.  Then, later, when I saw in the paper something I’d already heard him say, I had the sense of saying to myself, ‘Why, that’s just the way I feel about it.  He’s right.’

And now I want to say, after some detailed study and after living over old days and old scenes, that I come away realizing that he was a far greater man than I dreamed.  It seems to me, in retrospect, that he represents the best in American life.  His day is gone forever—the day of the old West, the day when each man depended on himself, the day when honesty and integrity were qualities that mattered very much.

In closing, I think I can say that I loved Will Rogers.  Sometimes he made me as mad as hops…what friend doesn’t?  But to say that one loved him is no distinction, for millions did.  In all America what man was more deserving?”

There is so much more to Will Rogers life which we will learn about shortly, so with that personal quote, we hope you enjoy the film and come away with an interest in a remarkable man. 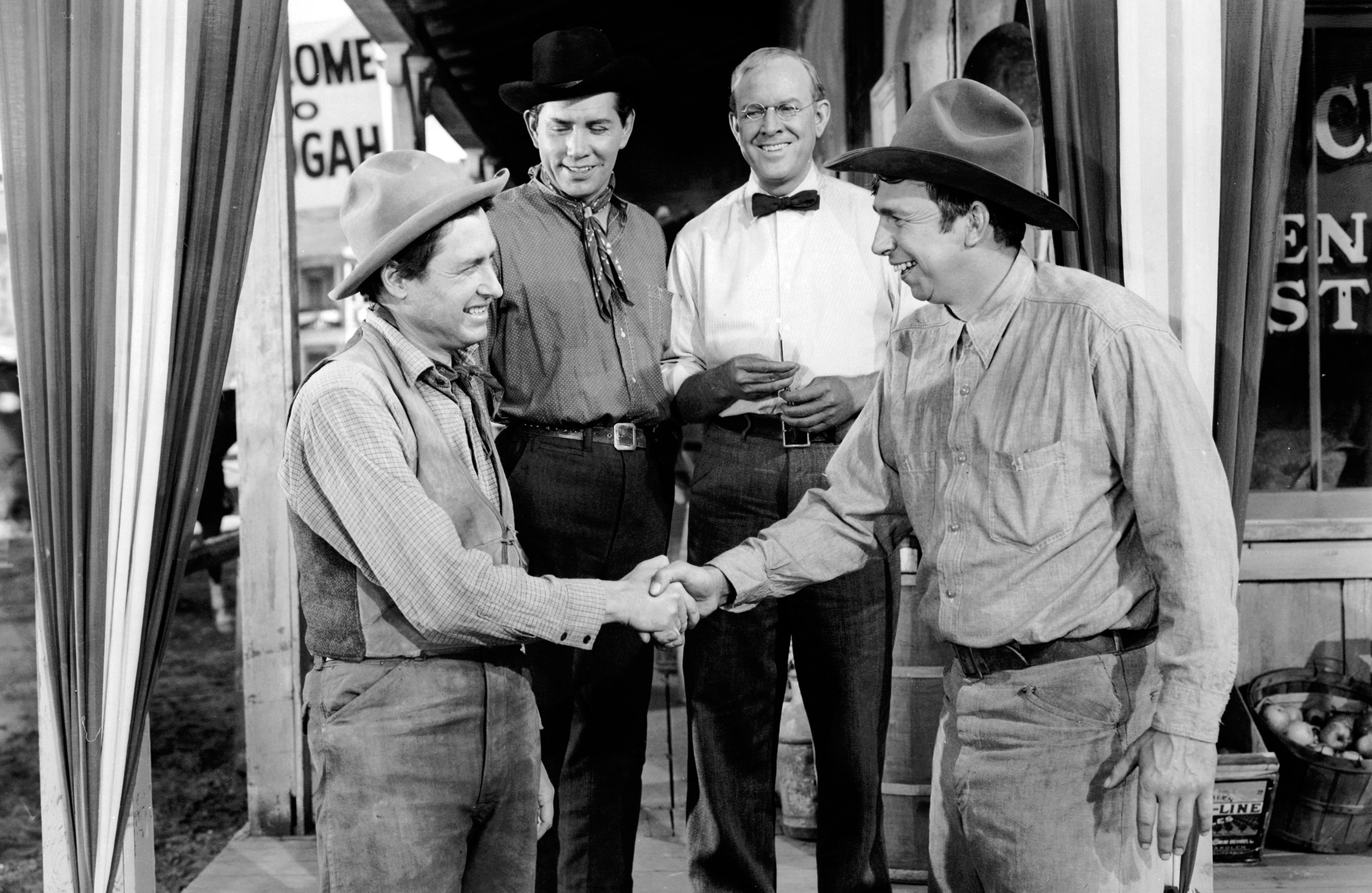 Will Rogers was born in 1879, in the Cherokee Nation of Indian Territory in present-day Oklahoma. His parents were of mixed race and Cherokee ancestry, and the family identified as Cherokee. Rogers had said that his family didn’t come over on the Mayflower but they met the boat. The film barely mentions his First Nations ancestry due, I suppose, to 1952 social sensibilities. It is nice to see Jay Silverheels, a full-blood Mohawk, in a small supporting role as Joe Arrow, a Cherokee friend of Rogers’.

Jay Silverheels was born with the name Harold Preston Smith, on the Six Nations of the Grand River near Hagersville, Ontario. He was one of 11 children, and his father was a decorated Captain in the Canadian Army during the First World War, earning the Military Cross for his actions at the Somme and Ypres. His grandfather was a Chief of the Mohawk Nation. He excelled in athletics as a youth; most notably, in lacrosse. He left home to travel around North America before he began playing lacrosse professionally for the Iroquois of Rochester, New York. He also boxed professionally, and placed second in the Middleweight Division of the Golden Gloves Tournament, in 1938. While in Los Angeles, on tour with an indoor lacrosse team, actor and comedian Joe E. Brown saw him play. Brown was impressed with Silverheels’ athleticism and encouraged him to take a screen test. In 1937, this led to jobs as an extra and a stunt man, where he was billed under his real name, Harold (or Harry) Smith. He appeared in many low-budget films; mostly Westerns and serials. In the 1940s, he began appearing in major films and took the name Jay Silverheels—Silverheels being the nickname he’d gotten as a lacrosse player.

Some of the major films he appeared in include: Captains from Castille (1947) with Tyronne Power; Key Largo (1948) with Humphrey Bogart; Broken Arrow (1950) with James Stewart; War Arrow (1954) with Maureen O’Hara; Drums Across the River (1954) with Audie Murphy; Walk the Proud Land (1956), also with Audie Murphy; Alias Jesse James (1959) with Bob Hope; and Santee (1973), in which he had a substantial role opposite Glenn Ford. One of his last roles was in the Burt Reynolds film The Man Who Loved Cat Dancing (1973), also starring Sarah Miles and Lee J. Cobb.

Jay Silverheels is best remembered for his role of Tonto in The Lone Ranger television series and movies from 1949 to 1957. His role of Tonto would inevitably leave him typecast as the stereotypical Indian. He would go on to appear in this type of role in many of the western television series of the 1950s, 1960s, and early-1970s. In 1969, he appeared on the Johnny Carson show, spoofing his Tonto character. He told Carson that he was Tonto from Toronto and spoke Esperanto. In 1970, he was in a Chevrolet commercial as an Indian who rescued two hunters who had ignored his advice to take a Chevy Blazer into the back country. He and John Hart, The Lone Ranger, were in a pizza commercial made by comedian Stan Freberg. They also appeared as their characters in a 1970 comedy film titled The Phynx (1970). Many other veteran actors appeared in cameo roles for that film, including: Leo Gorcey and Huntz Hall of The Dead End Kids/Bowery Boys fame; character actors George Tobias and Andy Devine; and major stars Maureen O’Hara and Pat O’Brien, as well as up and coming comedian Richard Pryor. Even Colonel Sanders; Edgar Bergen and Charlie McCarthy; Ed Sullivan; and George Jessell were among the stellar cast of cameos.

Silverheels had to work as a salesman to supplement his income during times when his acting roles were scarce. He also published poetry inspired by his childhood on the Six Nations Reserve, and often recited his poems on television. At one time, he bred and raced Standardbred horses. Someone once asked him if he would race his horse Scout from The Lone Ranger show. He replied that he could outrun that horse. He supported the Indian Actors Workshop in the 1960s, and it has since become firmly established in the entertainment community. His honours include: being inducted into the Hall of Great Western Performers and The Western New York Entertainment Hall of Fame; a star on Hollywood’s Walk of Fame; a Life Achievement Award by the First Americans in the Arts; and being inducted into the Canadian Lacrosse Hall of Fame under the Name Harry “Tonto” Smith. He died in 1980, at age 67, of complications due to stroke. He was cremated, and his ashes were returned to the Six Nations Reserve.